Pasta with Mushrooms, Kale and Walnuts 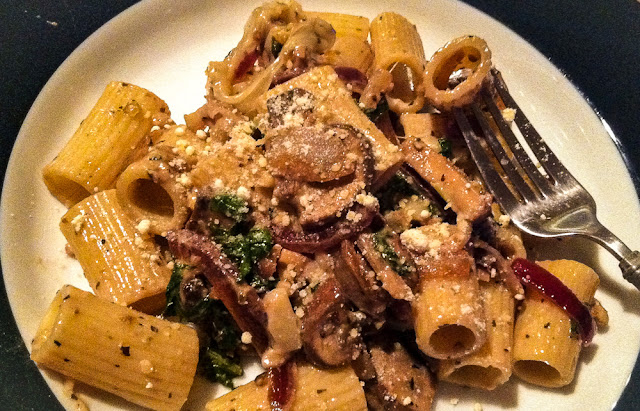 Dinner. Now, please. Something, anything quick. Okay, maybe not anything. Flavor matters.

We had an early evening, low-energy emergency in the kitchen and there was no plan. Aaaargh! A crisis loomed until I opened the fridge and spotted some crimini mushrooms and dinosaur kale. It had been weeks since my surgery, when RL took over cook and butler duties, and I was SO anxious to return to the kitchen.This simple pasta bowl solved the problem and was surprisingly tasty for an unplanned, no-recipe dish I could handle while moving around on crutches.

This so-simple-you-don't-need-a-recipe combination might have been inspired by something I found on pinterest, or maybe a Facebook page, but I couldn't locate it again. Too many pins and posts, too little organization, but no problem. The improv worked out just fine; quick, easy and flavorful, PLUS I got to play briefly in the kitchen.


Pasta with 'Shrooms, Kale and Walnuts

Warm a serving platter or bowl in the oven.

Melt butter in a heavy skillet over medium-high heat; working in batches as necessary, cook mushrooms, onions, Italian herb mix, garlic, salt, and pepper until mushrooms are golden and give up their juices, about 12-15 minutes.

Add to the skillet the drained pasta, half of the pasta water, half the ricotta, kale shreds, salt, and pepper and toss to combine. Add more cooking water as needed.

Transfer to the heated serving platter and garnish with remaining ricotta, walnut pieces and Parmesan. Drizzle with honey, if you like.
No comments: 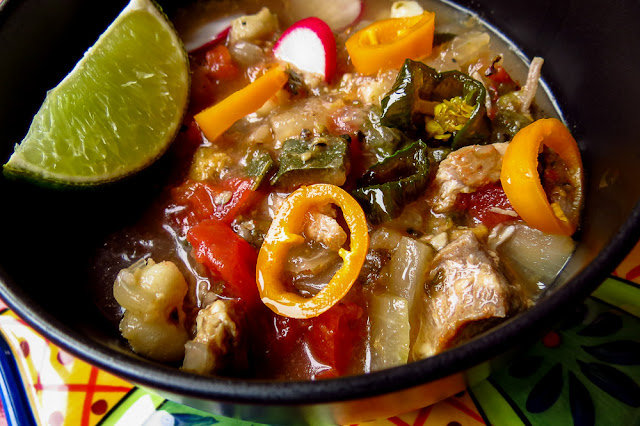 Even before opening my eyes I knew, it was going to be one of those days weatherwise. The wind howled outside, rattling the glass and shaking the screens on the sliding glass doors. Rain pelted the windows with a rhythmic rat-a-tat-tat fury. Finally awake and out of bed, I marveled at the three-foot surf racing across the lake to pound against our rock breakwater and roll up onto the small gravel beach. This was a perfect excuse to stay warm and dry inside and make one of our favorite comfort-food soups, pork posole (pozole).

The recipe may look lengthy, but it is a shortcut version with remarkably little hands-on time for the cook. While the meat simmers low and slow in the oven the kitchen smells heavenly, perfumed with Southwest aromas. The aroma alone recalls fond memories of flavorful bowls of posole in New Mexico during SW road trips. More "authentic traditional" posole recipes call for (1) reconstituting and cooking hominy - field corn boiled with slaked lime and dried  - and (2) building an ancho chile puree from dried peppers  that have been toasted, deseeded, soaked and pureed. Not necessary, in my opinion, this quicker version is plenty tasty without requiring a full day of cooking.

Posole, likened to a soupy stew, is often a celebratory dish in northern New Mexico, offered red, green or Christmas-style during the holidays.

New Mexico is the only state with an official question—"Red or green?"—referring to the choice of red or green chile. Combining both red and green chile is often referred to as "Christmas". Wikipedia

We don't need a holiday or special occasion to enjoy posole at home. Red/rojo or green/verde, served with an array of garnishes, this soup can make any meal seem like a celebration. Not fond of pork? Try this delicious Green Posole with Chicken recipe instead. Or get creative and develop your own version. 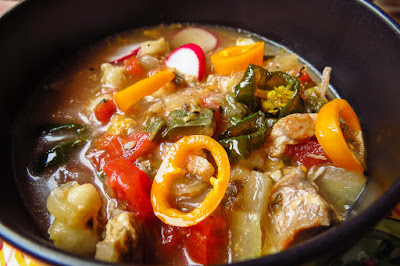 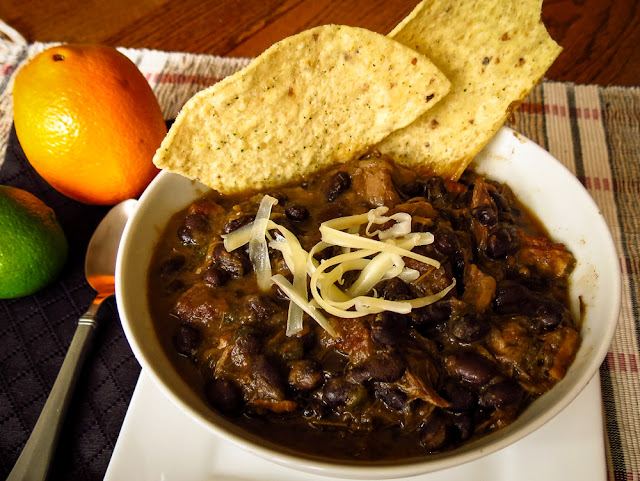 It's always interesting to see what the husband brings home from the grocery store, even when sent with a list. I organize the desired items by department - produce, dairy, meat, frozen, bakery, etc. - but we can still end up with a few surprises. "Sprouts", for example. I had bean sprouts in mind but he came home with Brussels sprouts instead. Oops, I should have been more specific. Quick, revise the dinner menu! "Steaks" were intended to be the beef strip loins that were on sale, but he found a great pork bargain of Buy One, Get Two Free. Suddenly we had a lot of pork shoulder on hand. This impromptu soup was inspired by his recent shopping adventure. Yum, it was welcome comfort food on a stormy Seattle afternoon. 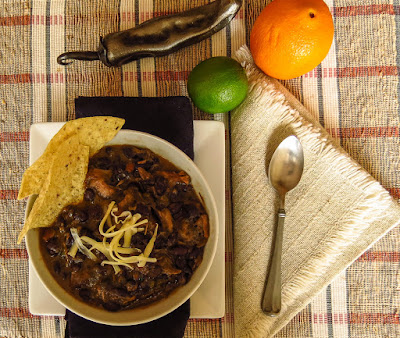 Preheat the oven to 325 F.
Add oil to a heavy-bottomed Dutch oven and heat to shimmering over medium-high heat. Add the pork in several batches to avoid crowding and brown on both sides. Remove to a plate or bowl and sprinkle with salt and pepper.
Add the onion, pepper slices and garlic to the pot; stir until fragrant; cover and sweat for 5 minutes over medium heat.
Uncover and return meat to the pot. Add the next 6 ingredients, oregano through oranges, to the pot and stir to combine.
Cook in preheated 325 F oven for 2 hours or until meat is tender.  Stir in the beans and return to the oven to heat through (or use the stovetop). Add more broth if you prefer a soupier soup. Taste and adjust seasonings.
Ladle into warmed bowls and serve with lime wedges, shredded cheese and lime tortilla chips (optional)
This soup definitely gains in flavor after resting and reheating.