...perfect for a leisurely winter morning

I love the peaceful quiet of a morning when I'm the first one awake and out of bed. There's a typical pattern to this solitary start:

This morning was perfect for all of that, but I fired up the oven instead. My stomach was growly and a baking project sounded appealing, something sweet but not too time-consuming or overly complicated. It was early, after all. 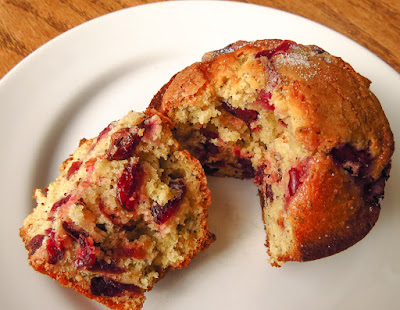 What do you bake when you crave a sweet bite in the morning but don't want to mess with the lengthy process of a yeasted dough? An quick bread or coffeecake would do, but this morning Cheery Cherry Poppy Seed Muffins sounded more appealing. These fruit-filled beauties are delicious with the added bonus of speed - they take less than an hour from start to finish. 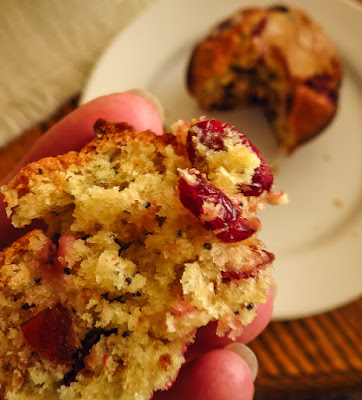 We have enjoyed various versions of this Tyler Florence recipe; swapping dried cranberries for dried cherries, adding nuts, changing up the choice of citrus, substituting rosemary or lavender for the poppy seeds, etc. Today's version was a winner, a two-thumbs-up hit due to the addition of the frozen cherries. The whole cherries (defrosted frozen sour cherries) gave the muffins a surprising flavor boost and textural pop.

Better than an alarm clock, the aroma of baking muffins wafted upstairs and roused RL. Fresh coffee and warm muffins created a perfect start to the day. Sweet and moist, the muffins were scrumptious without butter or jam. This recipe is a winner for family breakfasts, impromptu guests, or as part of a brunch menu. Yum! 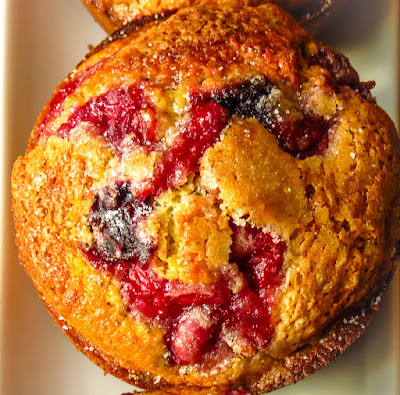 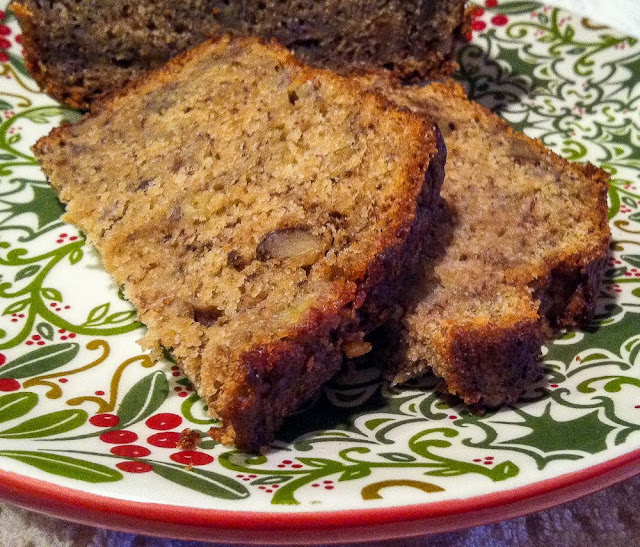 The Best? really? Well, the food department at Epicurious thinks so. The cooks began with a handful of tried-and-true recipes; they tested, tasted, adjusted, retested, ... and kept at it until this revision emerged as the test kitchen favorite, their so-called "frankenrecipe". What?? Weird label, but intriguing nonetheless. I'll admit, I was curious to see what the fuss was all about. Banana bread has been around for eons, what could possibly set this recipe apart?


The Epi kitchen noted four changes that seemingly made all the difference between good banana breads and "The Best".

These four elements are not earth-shaking revelations, but together they did produce a tasty loaf. Moist but not soggy in the middle, each bite or slice held together nicely on the fork or in the fingers. The essential banananess was taste forward, in a good way, and brown sugar provided hints of molasses without overpowering the flavor.

Was this loaf "The Best"? Who cares? My five kitchen tasters agreed that it was damned delicious and the entire loaf disappeared in less than 24 hours. I'll use this recipe again; it was worth messing around with three separate mixing bowls. 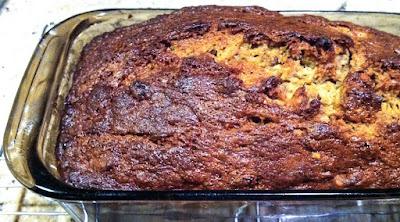 Preheat the oven to 350°F. Grease a 9x5" loaf pan with butter and dust with flour, tapping out any excess. (The paper wrapper from the cube of butter works well for this.)

Combine banana, sour cream, and vanilla in a medium bowl. Sift together flour, baking powder, baking soda, and salt in a separate bowl.

Using an electric mixer, beat the butter and brown sugar on medium speed in yet another large bowl until light and fluffy, it will take several minutes.

Add the flour mixture in 2 batches, beating on low after each addition, scraping down the sides of bowl if necessary, until fully incorporated. Use a spatula to fold in the walnuts.

Transfer the mixed batter to the prepared pan and smooth the top with a spatula.

Bake, rotating halfway through, until the batter is set, the top is a dark golden brown and starting to crack, the sides start to pull away from pan, about 60–65 minutes. Use a tester inserted into center of bread to check for doneness; bake until it comes out clean. (My oven must run cool, it took 72 minutes.)

Remove to a wire rack and cool in the pan for at least 15 minutes. Run a butter knife around the edge of the pan to loosen, then tap pan gently on its side until the loaf releases. Let cool completely on a plate or cutting board before slicing.

November and December brought a host of welcome visitors to the kitchen. Lively conversations, occasional tall tales and a ton of laughter kept the season active and upbeat. Buckets of late-season dahlias gathered from Pat's garden added riotous color to the room, as did the neon-bright vibrance of a mixed bouquet that Hilary found at Seattle's Pike Place Market. 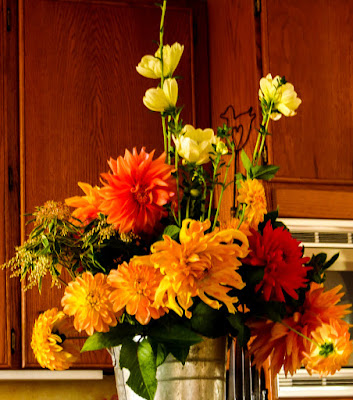 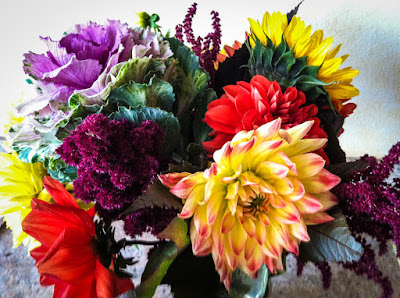 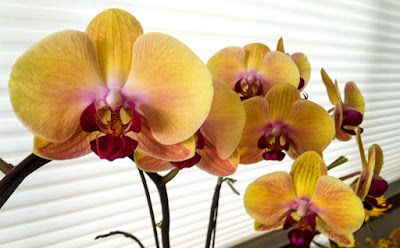 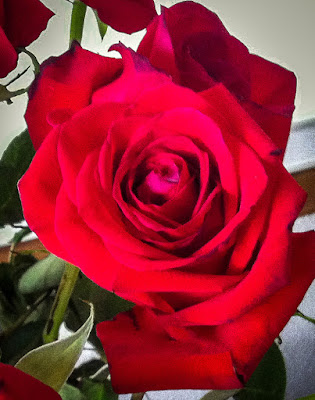 Flowers provided feasts for the eyes, but there was plenty of food action as well, just not much of my cooking. I love to feed people (drop by anytime and we'll enjoy a cuppa or some spirits plus a homemade treat), but lately I've been the guest as friends and family bring the treats along with them. Several breakfasts, lunches and an amazing Thanksgiving celebration all arrived as ready-to-go parties. We're so fortunate to have friends and family that are such awesome cooks! Hmmmmm, there might be pre-Christmas pounds piling up already.

RL continues his hunt for The Best pickled herring and kimchi available locally. I politely decline his invitations to join the ongoing taste tests, considering myself a hero good sport for allowing these aromatic items to hang out in the fridge! My one and only attempt at pickling herring (link) squelched my enthusiasm, but I am willing to give homemade kimchi a try... maybe next year. This duo was a recent purchase, judged tasty enough to eat but still not the ultimate he's searching for. 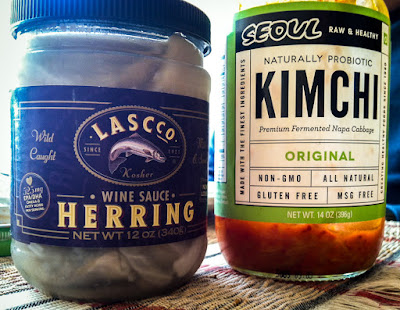 Hilary created intriguing "zoodles" with her new kitchen gadget, a spiralizer. Topped with the latest batch of Minnuto spicy red sauce, these zucchini and yellow squash noodles were a low-carb dinner hit and a surprisingly good swap-out for pasta. 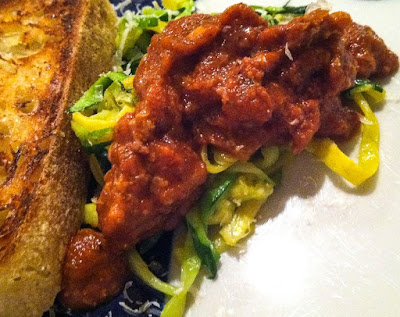 Oven-roasted vegetables are seasonal favorites - ok, at least one of us loves them. We're increasingly fond of roasted cauliflower, fennel and broccoli as stand-alone items, then as flavor-packed components in mixed-ingredient dishes. Tasty and healthy, what's not to like about veggies? (Are you reading this, RL?) 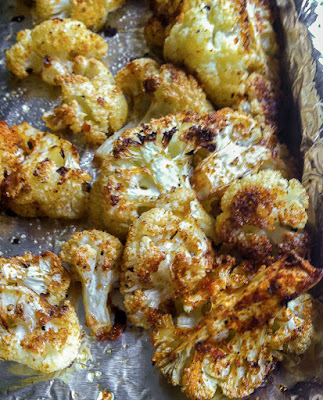 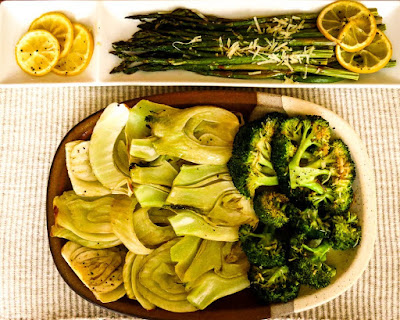 Leftovers often accumulate when there are only two of us dining. Leftover Thanksgiving turkey is prized for cold sandwiches and Kentucky Hot Browns, leftover roasted veggies are terrific on sandwiches, in frittatas and salads, but this week's leftover item of choice was wild rice. It made a perfect base for this colorful, sweet yet savory, crunchy and tangy, Nutty Wild Rice Salad. We rediscovered this forgotten favorite from the Silver Palate cookbook and both wondered why it had been ignored for so long. Tasty enough at lunch, with some added shredded chicken it's a satisfying dinner salad, and later on a remaining cup worked well as filling for a few lettuce wraps. 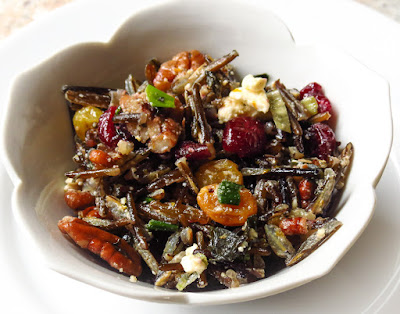 This post is linked to Celia's IMK monthly get-together at Fig Jam and Lime Cordial. Celia has hosted this gathering for five years, building an amazing community of food bloggers who invite you inside their lives and kitchens for a virtual visit each month. Thank you Celia, for your efforts and energy in organizing the party!