Red meat, anyone? Yes, please! Salads and roasted or grilled vegetables are undeniably healthy and tasty, and appear daily on my plate, along with some chicken or fish for protein. But every now and again I really crave beef. Visions of juicy chile cheeseburgers and thick well-marbled steaks dance in my brain. Even a well-flavored meatloaf sounds good. Okay, not as tempting as a perfectly cooked steak, but meatloaf does occasionally call my name.

This week Food52's spicy Coffee-Rubbed Cowboy Steaks with Chocolate Pan Sauce hit the plate. A really good steak doesn't need much beyond salt, pepper and a quick sear over high heat to provide a tasty entree. But, when you begin with a rub packed with intense, tongue-tingling flavors and then finish with a rich, velvety pan sauce... oh! my! it makes the taste buds sing "hallelujah" with each bite. Yes, it was that good.

Hil took over dinner prep, with RL shining as salad-maker and #1 assistant. Me? I parked my crutches and sat at the kitchen table, sipping a cup of tea, while that cheery duo dealt with dinner prep. The aroma of warming spices and coffee was the first indication that dinner would be flavorful. Initially the familiar aroma of coffee filled the kitchen, with cumin and smoked paprika barely noticeable, but the scent of spices became more pronounced when the meat was seared over high heat. A meat thermometer helped achieve the desired level of doneness, medium-rare for this crowd. Removed from the oven at 120-125 degrees f,  the steaks were a perfect medium-rare after resting while the pan sauce was prepared.

The steaks would have been a hit straight from the oven, but the pan sauce with a chocolate stout reduction and a dollop of butter added an amazing finishing note. It will be fun in the future to play with different flavored beers, spirits and herbs to see how much that changes the taste. We are definitely going to enjoy this preparation again. Thank you Hil, RL and Food52.

Spicy roasted cauliflower florets and a Greek salad provided some welcome crunch and healthy vitamins to the dinner, proving almost as popular as the rubbed and sauced slices of steak... almost. This was definitely a dinner to remember, and to repeat.


recipe from the Food52 Cookbook and online blog

To serve:
Slice the steak across the grain and drizzle a bit of sauce over top. Serve the extra sauce in pitcher or small bowl. 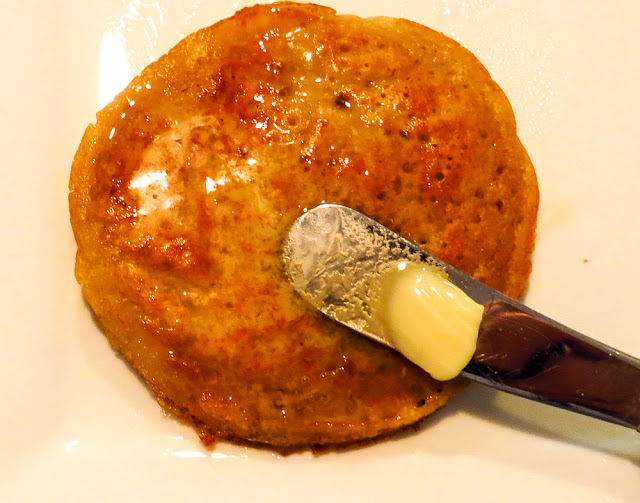 
"Crumpets are the quintessential, afternoon tea treat, served warm with lots of butter. The soft, spongy crumpets we know today, reputedly, come from the Victorian era and are very different from early, flat griddle cakes. It is the extra yeast in the batter which creates the soft texture and the myriad of little holes on the top (so perfect for soaking up the butter)." link

Crumpets have never graced a plate in my kitchen. I've read references to English tea and crumpets, but have never held or tasted one. The commercial packages of crumpets at the local grocery look uninviting, more like wimpy, anemic cousins of the extra-crispy English muffins that I love. Now how's that for an unfair, blatantly uninformed opinion?! Sourdough Surprises chose Griddle Breads for the September 2015 challenge, prompting  me to give this griddled yeast bread a try.

The ingredient lists and directions I found in various online recipes were simple enough. Crumpets sounded more like fat pancakes or thin English muffins - easy peasy, right? Well, not quite. As with so many seemingly simple things, the devil is in the details. Batter consistency, the amount of batter per crumpet ring, griddle temperature and the decision to flip or not to flip can drastically alter the appearance and texture of these round, crater-speckled little disks. Success is apparently to be measured by the quantity of holes on the upper surface.

I chose an old 1991 recipe I found online at the King Arthur Flour site (link). In my experience, King Arthur recipes rarely fail. Old Faithful, my sourdough starter, was refreshed, rested and ready for action, hanging out at room temperature on the counter near the stovetop. A heavy, well-seasoned cast iron, smallish mixing bowl, a silicone whisk and six metal muffin rings rounded out the equipment list. Ready, set go! 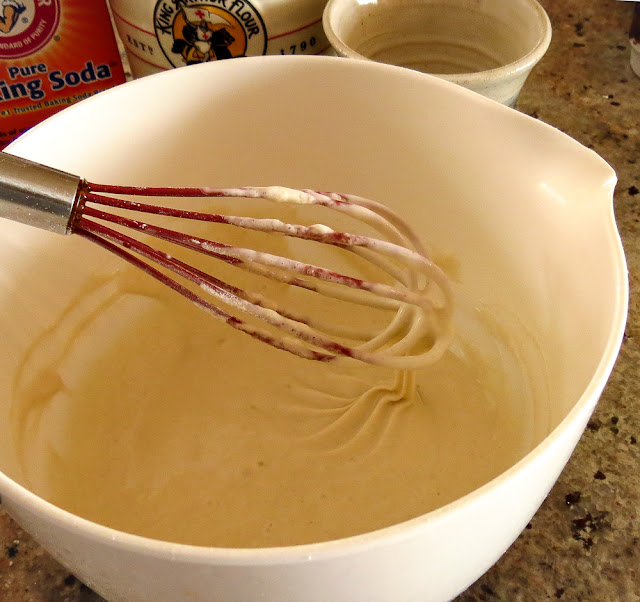 The simple batter called for four ingredients: 1 cup of sourdough starter, 1 teaspoon sugar, 1/2 teaspoon salt and 1/2 teaspoon baking soda. Poof! a gazillion carbon dioxide bubbles form to fluff up the batter. My starter is fairly stiff, so I added 3 tablespoons of milk to loosen up the batter to a more pancake batter-like consistency. Why milk? I had read somewhere online that crumpets typically include milk whereas English muffins call for water. 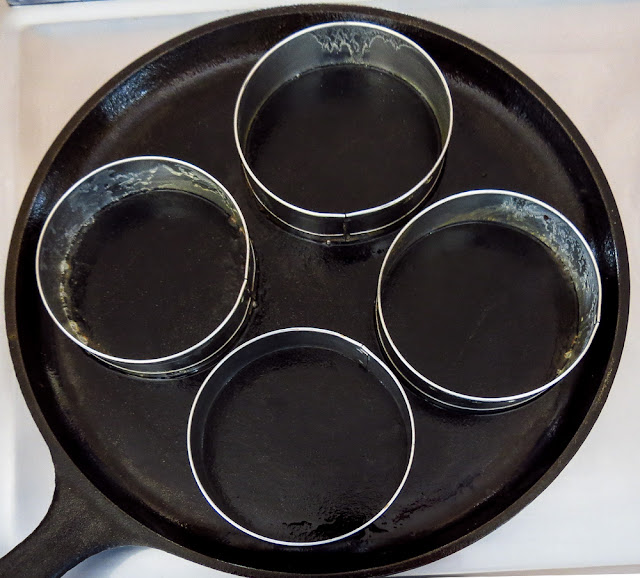 Lightly grease the griddle or heavy skillet and the inside of each metal ring to minimize sticking (use well-washed tuna cans if you don't have crumpet rings). Preheat the pan and the rings for several minutes over low to low-medium heat on the stovetop. (I used a setting of 2.5 out of 8 on my electric range) 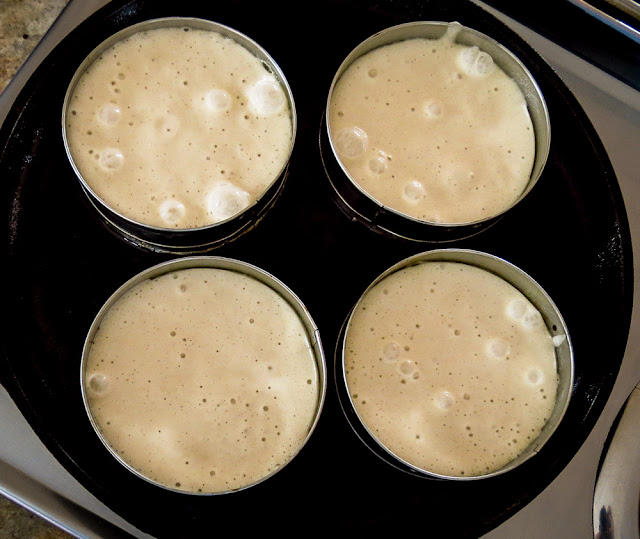 Ladle or pour some batter into the greased rings, filling no more than half way up (a scant 1/3 cup in each). This allows some space for the batter to rise. Cook over low to low-medium heat until the tops are set and bubbles stop forming (4-5 minutes on my range). Remove the rings and flip; briefly cook the second side for a minute or two to set up and add color. 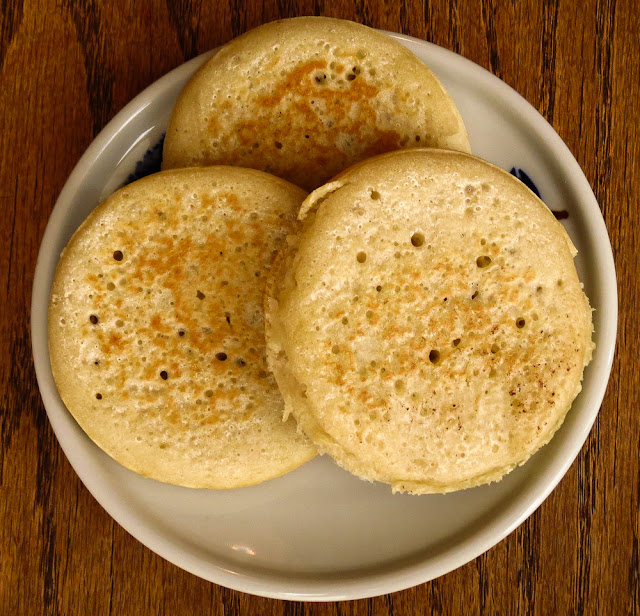 Set the cooked crumpets aside, regrease the metal rings and repeat the above cooking steps with the rest of the batter. I added a few more tablespoons of milk to to the remaining mix to see if a smaller quantity of a looser batter would produce more holes. This time I ladled only 1/4 cup of batter into each ring. 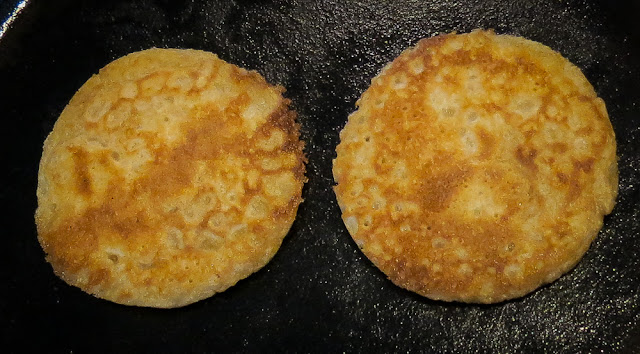 This second batch produced thinner crumpets with fewer holes. What? The looser-batter test results were inconclusive, since the baking soda may have lost its lifting power oomph over time. No problem with taste however, these thinner disks still rated two thumbs up with RL as he ate one straight from the skillet. 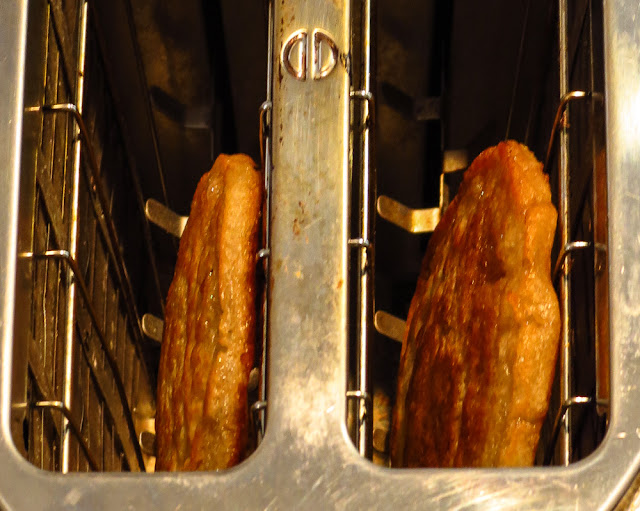 Thin crumpets are tasty enough hot off the griddle, but are even better when toasted, rendering them fairly toothsome and crispy throughout. Fatter crumpets emerge from the toaster with crisp exteriors and soft, almost fluffy interiors. Blame it on my existing love affair with English muffins, but I like to split the fat muffins in half before toasting to crisp up the insides a bit more and minimize the soft texture. Add butter and honey and you might discover that crumpets are so good you can't eat just one. Go ahead, see for yourself. Then click over to Sourdough Surprises and check out this month's griddle cakes from other kitchens. 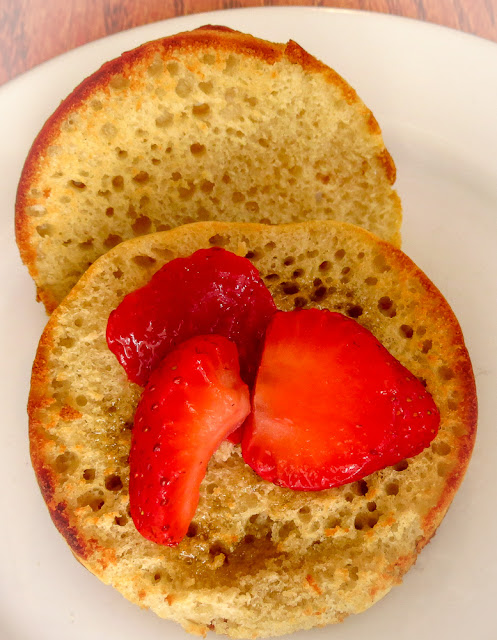 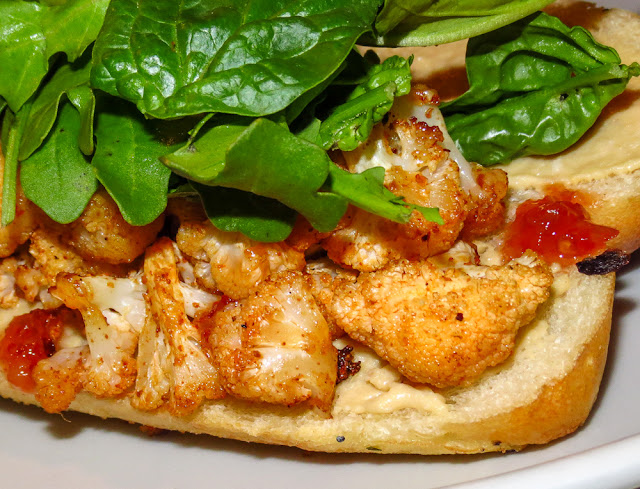 Hilary and Ron worked together to prepare dinner last night, while I sat at the other end of the kitchen and played guest. What a treat! Ron built a healthy and delicious Greek salad and Hilary prepared an amazing roasted cauliflower sandwich. 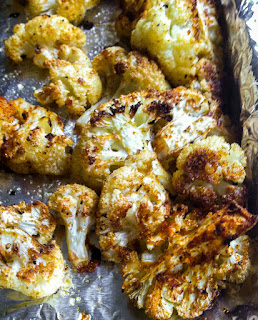 Usually I rave about toasted meat and cheese sandwich combinations, not roasted veggies, but this sandwich deserves enthusiastic praise. It comes long distance from one Washington to another; via Hilary from Ann Marie's recreated version of a favorite at Taylor Gourmet in Washington DC - with a few suggested tweaks of my own.


Sandwich love happens when the first bite brings a satisfied smile and happy taste buds without the brain fretting over what's on the inside of the fresh, crusty roll. Yum! Sweet, spicy, tangy, smooth and crunchy registered immediately and called for a second bite. Mmmmmm, this was SO tasty and satisfying that I didn't want to set the sandwich back down on my plate between bites.

Hilary had raved about the sandwich when she enjoyed Ann Marie's original, but I blew off the notion that a vegan sandwich could be all that good. Wrong! The filling combination hit all the right flavor and texture notes and I'm already plotting some other presentations: tortilla wraps, savory crepes, pizzas or open-faced tartines...

No, I'm not going to forgo my favorite green chile cheeseburgers or grilled cheese combinations, but this Spicy Roasted Cauliflower Sandwich has joined my list of favorites. Try it, you're going to love it and won't miss the meat. I promise. 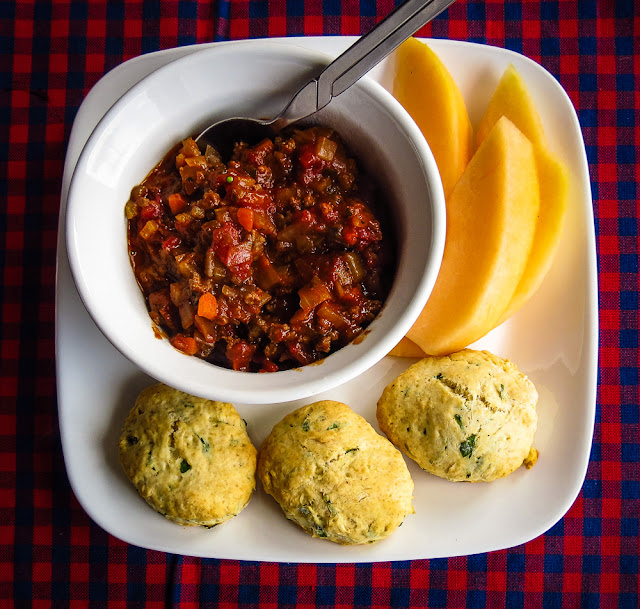 It's nearly Fall, with just one more week until the official autumnal equinox. Leaves are turning colors locally, brightening up our gray days with great sweeps of neon reds and oranges on nearby hillsides. NFL season is in finally in full swing with team rosters set. (Go Hawks!)

You know it must be time for chili and cornbread and red plastic cups at tailgate parties... But this week I'd rather indulge in beer biscuits and pass on the bottled brews. Yes, I'm back on crutches this month and mindful of careful footwork and balance. So I will pass on the usual cornbread too, and reach for some more of these flavor-packed biscuits instead. They make tidier finger food with fewer crumbs but are still loaded with some of my favorite southwest flavors. Pepper jack cheese, bacon, green onions, chile powder...yum! Now I wonder how a waffled version would work???

Tex-Mex Beer Biscuits
based on a recipe from the Beeroness 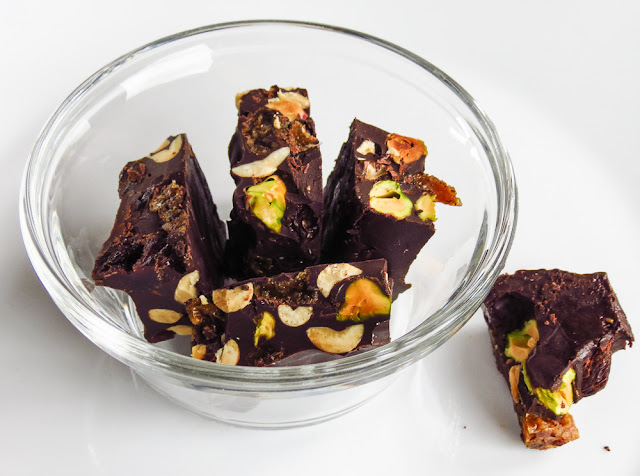 Chocolate as a health food? now that's an intriguing claim. I haven't read the research on the efficacy of chocolate as an antioxidant, anti-inflammatory, blood pressure reduction agent or any of the other claims, just skimmed a few brief summaries, but I'm willing to embrace the health food notion. Chocolate works for me as a soothing mood enhancer. Just thinking about it, I'm ready to sign up for a daily dose of chocolate therapy... as long as it's good dark chocolate. None of the disappointing, fat-filled, paraffinlike, pseudo-chocolate for me, thank you very much. Good chocolate isn't cheap but spend a little extra for a flavor you love. You don't need to get label crazy, but it's worth the extra pennies to purchase a better quality. Chocolate is the star of this treat.

Gnawing on a block or a bar of bittersweet chocolate might provide a quick, semi-guilty bite of bliss, but here's an easy-to-prepare option that looks suitable to share with company... if you can bring yourself to share. Add a few dried fruits and nuts to some barely melted chocolate, spread in a pan, chill and voila! you have a pan of decadent, supremely satisfying, chocolate temptation. Now how easy is that? Healthy? well, maybe. Tasty? oh yes, definitely YES! 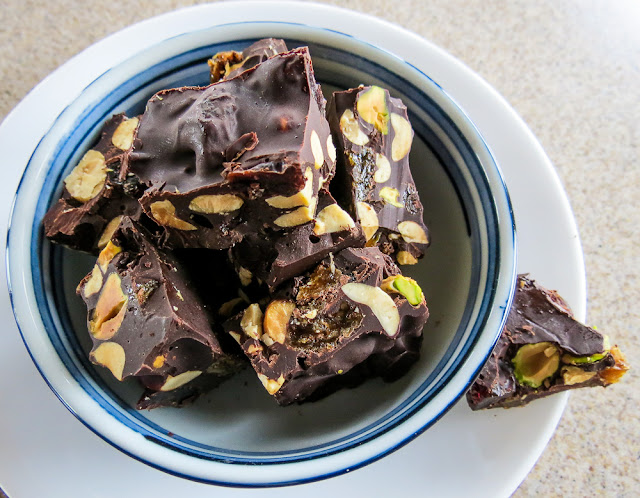 Recipe based on several others found online at Gourmet/Epicurious, Orangette, FoodNetwork, and a host of others.


1 ¼ lb bittersweet chocolate, 60-70%, chopped
Vegetable oil to grease the pan
2/3 cup dried cranberries (or other dried fruit)
2/3 cup golden raisins (or other dried fruit)
2/3 cup roasted, shelled pistachios, salted or unsalted
2/3 cup roasted peanuts, salted or unsalted (or other nut)
Note: These candies keep in the refrigerator, wrapped in foil or in an airtight container with foil between the layers, for up to two weeks.