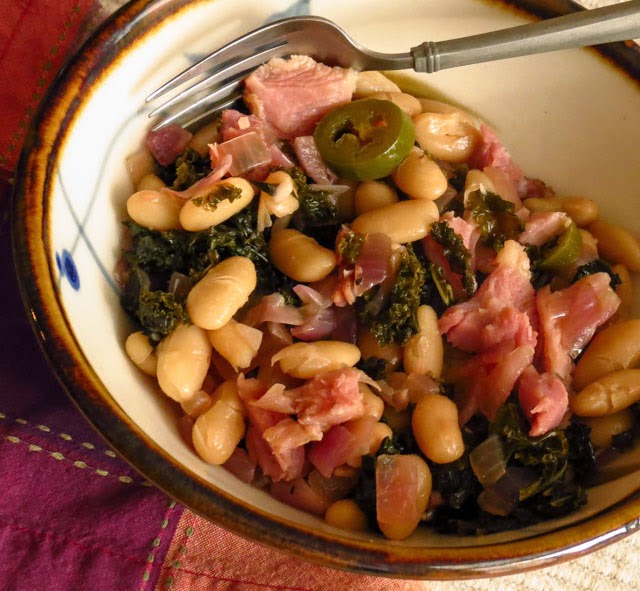 It's been windy and rainy all week, it might snow on Saturday, there are still a gazillion football games that will need a half time snack... and those are reasons enough to cook up a mess of greens. As if I needed an excuse to combine smoked turkey parts, fresh kale and white beans with garlic, jalapeño slices and a splash of red wine vinegar. Those six flavorful ingredients plus a hit of hot sauce came together into an irresistible bowl of comfort food for lunch today. A small portion would be perfect as a side dish, but we went with a large bowl apiece for a filling, one-dish meal. Tomorrow I'll add some chicken broth to the leftovers for a tasty souplike version of the recipe.

This dish was inspired by a recent Food Network Thanksgiving special, something I had turned on as background noise to keep me company. It stayed in the background until a preparation for Southern collard greens grabbed my attention. Forget the featured turkey, cornbread dressing and sweet potato something, I craved those smoky greens! Using the Michael Symon recipe as a base, I made a few changes. We prefer kale to collard greens, and I always have some on hand, so that accounted for the first change. A jar of Mezzetta's Tamed Jalapeño Rings substituted for a fresh chili pepper. The dish needed more substance, so a can of cannellini beans joined the party. Green Tabasco sauce added a final pop. Oh, baby, those were some good greens!


I have half a dozen other kale posts, all recipes we enjoy, but this is the first kale dish that RL has requested as a repeat. That's a good sign, those must have been some good greens!

Hot sauce, such as Green Tabasco or your favorite

Directions:
Notes:
* Next time double the amount of greens, or use larger bunches of kale, equal to roughly 2 pounds.
* Garbanzo (ceci) beans would be a good alternative to cannellini beans, providing more crunch to the dish. 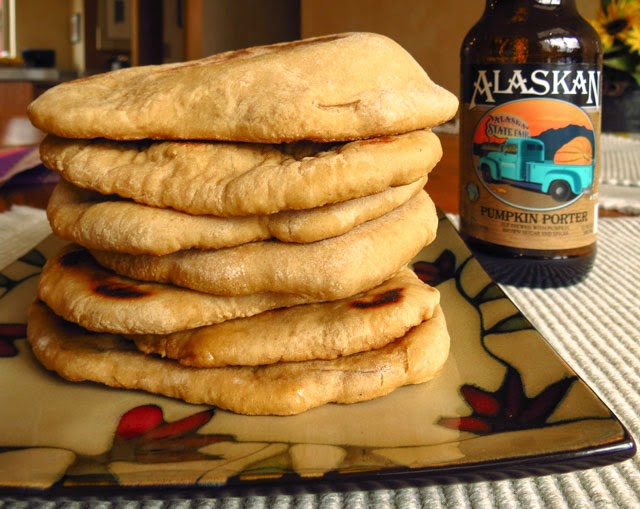 As noted in an earlier post, I don't eat pumpkin, not pumpkin anything. Forget the traditional pumpkin favorites of Thanksgiving pumpkin pie, pumpkin bundt cakes, pumpkin bread, pumpkin lattes... really, I mean it, not pumpkin anything. Match that with my love of a challenge and my frugal nature and you can imagine the issue when I found one last bottle of Alaskan Pumpkin Porter hanging out on a garage shelf. I couldn't throw it out. Left over from an earlier Autumn event that bottle sat ignored and gathering dust amidst newly purchased beverages. Though guests reported the brew to be quite tasty, I just couldn't get past the ingredient list of "ale brewed with pumpkin, brown sugar and spices". 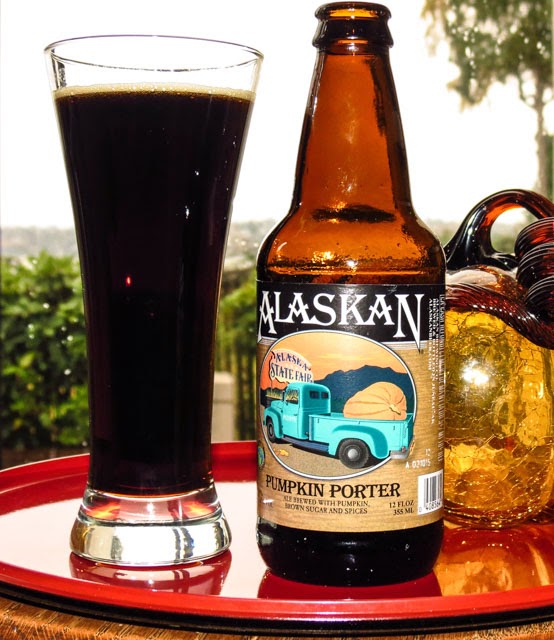 Today I finally popped the top and poured a glass for a taste test. Surprise! The first exploratory sip was fairly pleasant; this was a dark, chewy porter with some flavor muscle and a hint of sweet, undefinable something, a something not pumpkin. Fine, but at 9:20 a.m. what else could I do with the brew besides drink it? Use it in soup or a stew? Bake beer batter brownies? Braise some pulled pork? The Beeroness came to the rescue with her recipe for Homemade Beer Pita Bread, a quick yeast bread that reminded me of this month's #TwelveLoaves baking theme - Pumpkin.

My KitchenAid made short work of mixing the few ingredients and cranking out the requisite minutes of kneading. The dough ball doubled in under an hour in my 67 degree F kitchen, no surprise since a full package of yeast (2 1/4 teaspoons) was working away on 2 1/4 cups of flour. Divided into eight pieces, the dough rolled easily into six-inch disks - how easy could it be?! 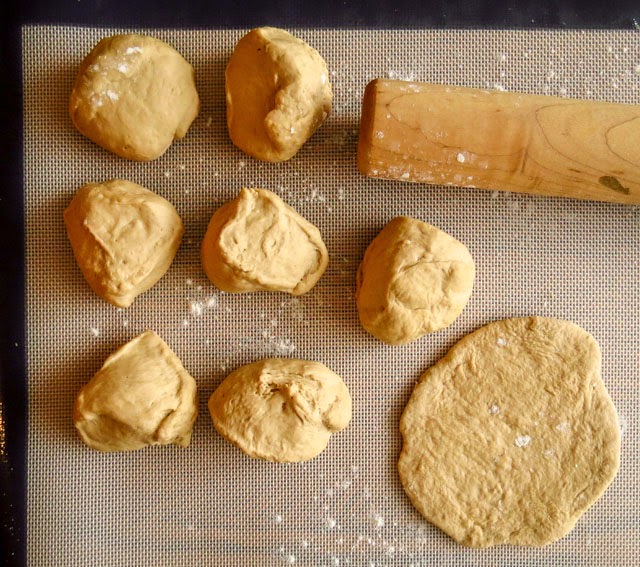 Each Pita round cooked in mere minutes in a cast iron skillet on the stovetop and bubbles appeared like magic. I'd make a double batch next time just for the fun of watching those gas bubbles puff up and expand. 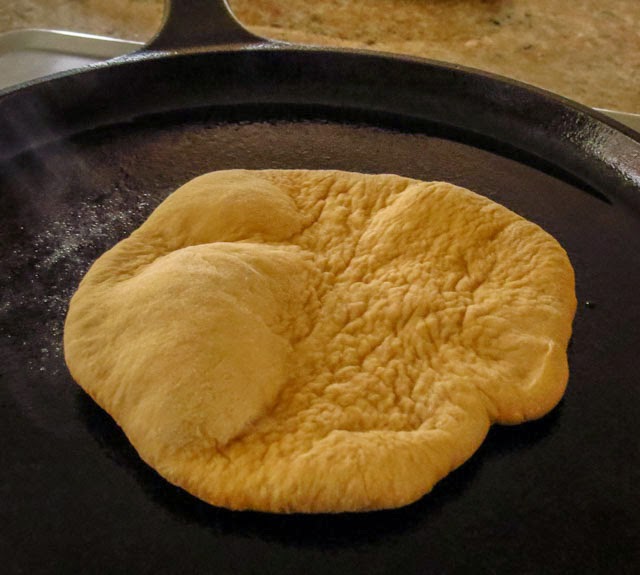 I eagerly tore apart the first pita, checking first for easy separation of top and bottom. Success! Next came a tentative nibble, taste testing for any pumpkin flavor. Nope, not even a hint of the dreaded pumpkin taste, just a pleasant, semi-sour tang. Finally I added a slather of butter and a sprinkle of sea salt to the still warm pita and finished it off, quite pleased with the non-pumpkin tasting Pumpkin Porter Pitas. They made terrific lunch sandwich containers, firmly chewy and holding together up to the last bite. 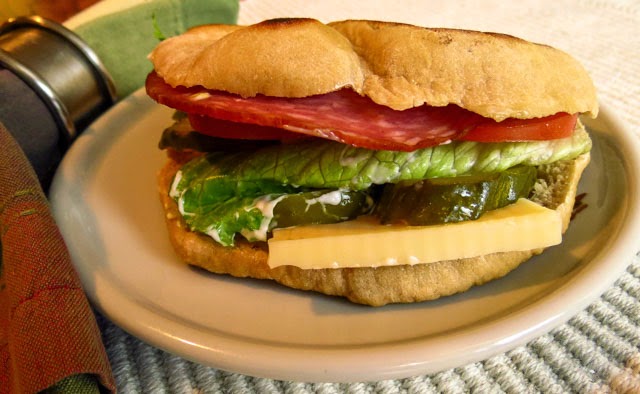 Would this be pumpkiny enough to qualify for the November #twelveloaves baking challenge? More pumpkiny than my pepita-topped sourdough dinner rolls (link)? Maybe... we'll see what that group of inspired bakers thinks (if anyone leaves a comment).


Note: If the pita browns too quickly, threatening to burn, turn the heat down or use a flame tamer (heat diffuser) to adjust the heat.

#TwelveLoaves is a monthly bread baking party created by Lora from Cake Duchess and run with the help of Heather of girlichef, which runs smoothly with the help of our bakers. Our host this month is Renee from Kudos Kitchen by Renee, and our theme is Pumpkin. For more bread recipes, visit the #TwelveLoaves Pinterest board, or check out last month’s tempting selection of #TwelveLoaves Apple Breads! 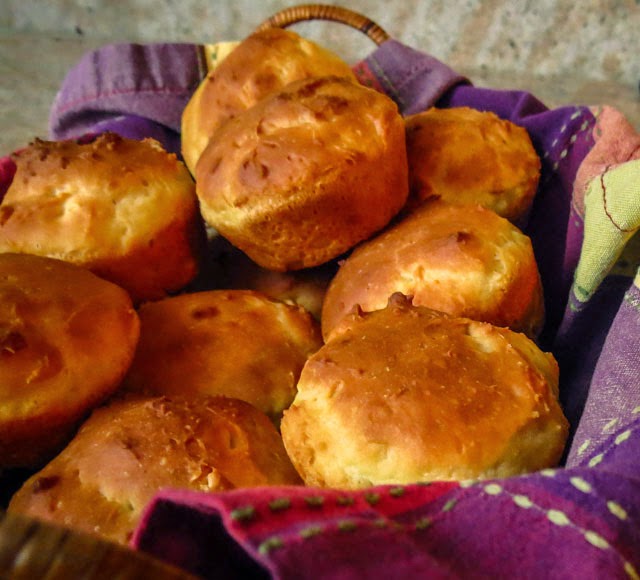 Last winter I played with several Quick Dinner Roll recipes, searching for one that might produce rolls to rival those of my mother-in-law. None matched the memory of Irene's light and airy rolls, so I'm still hunting for the perfect recipe. This month SourdoughSurprises chose dinner rolls as their baking challenge, providing me a welcome opportunity to check out successful recipes from other bakers as they post their results on individual blogs and on Pinterest. This group always produces amazing sourdough treasures.

Recent surgery has slowed down my culinary efforts lately, but it's time to get busy baking and cooking again. Soup has been a menu staple this month, helping to combat November's chilly weather, and nothing goes better with homemade soup than homemade rolls. Just the aroma of freshly baked bread adds warmth to the kitchen as well as smiles to my day. That said, I wasn't ready to attack heavy-duty kneading while still on crutches, so I returned to the search for a quick and easy dinner roll recipe, something I could do while seated.

Rather than create a real 100% sourdough dinner roll, I added sourdough starter to an adapted version of Double-Quick Dinner Rolls found in a 1961 edition of Betty Crocker's New Picture Cook Book. Quick but not exactly "double-quick", the recipe did come together easily and produced buns that were quite acceptable. Though still not as tender and light as Irene's, these rolls were a definite improvement over my previous attempts. 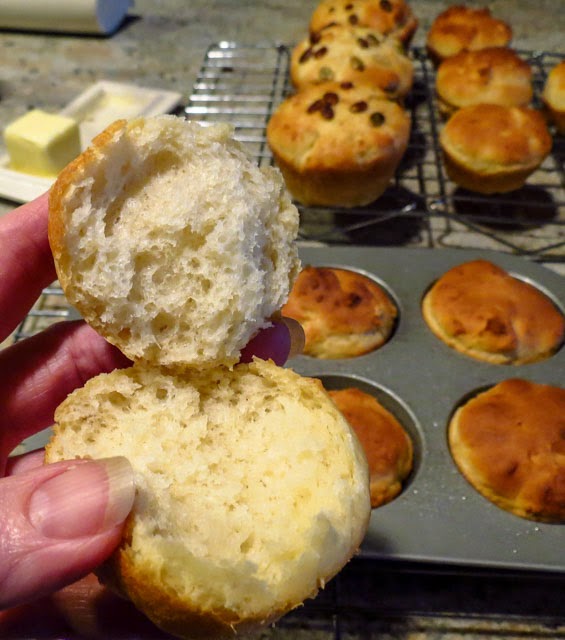 Perfect Quick Dinner Rolls are still a work in progress in my galley. Do you have a favorite recipe to recommend? 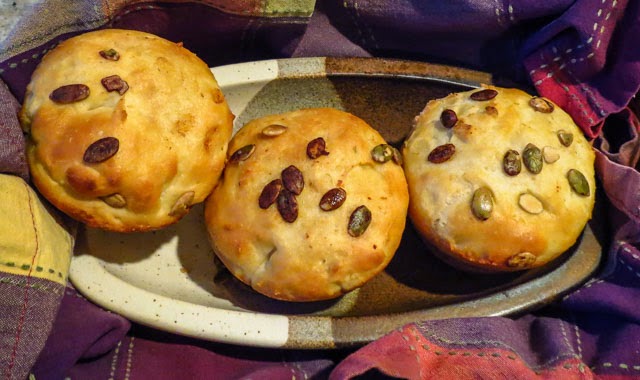 Note: #TwelveLoaves bakers chose pumpkin as their November challenge. A sprinkling of pepitas might qualify these dinner rolls as fitting their monthly theme, or maybe not. I don't eat pumpkin-flavored anything so these buns are as close as I'll come to baking with #TwelveLoaves this month. If you are a pumpkin fan, you'll want to check out their bread recipes for November.

#TwelveLoaves is a monthly bread baking party created by Lora from Cake Duchess and run with the help of Heather of girlichef, which runs smoothly with the help of our bakers.Our host this month is Renee from Kudos Kitchen by Renee, and our theme is Pumpkin. For more bread recipes, visit the #TwelveLoaves Pinterest board, or check out last month’s tempting selection of #TwelveLoaves Apple Breads! 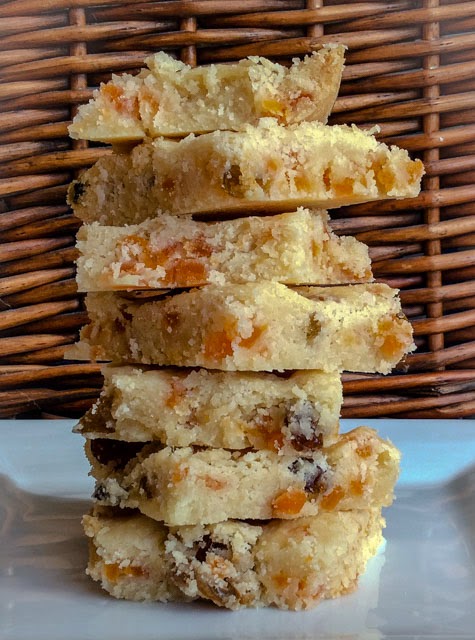 My first post-operation foray into kitchen action included a predawn raid on the baking cabinet. After weeks of healthy eating (fruits, vegetables and protein) my sweet tooth kicked in. Lucky for me that my recipe for buttery shortbread squares takes few ingredients, avoids any fancy rolling pin work, and can be made quickly - even by a cook on crutches.

My previous shortbread squares have relied on citrus zest for a flavor pop, but this time substituting freshly grated ginger made for a pleasant alternative. Dried  mango slices, still pliable and faintly moist, paired well with the ginger, adding a subtle tropical note. The golden raisins just came along for the ride it seems. I might toss in a bit of shredded, sweetened coconut next time for more Island flavor.

The result? flavorful, buttery, crumbly shortbread squares were a fine batch of celebration cookies for my first kitchen adventure in a month.

On the Move... nope, not so much lately.

It has been a while since I've been active in the kitchen, and I have missed the action. Well, that's about to change as I become more mobile, ready to challenge the 17-step vertical journey between bedroom and kitchen more often and still have enough energy left to slice and dice, stir and toss, etc. Soon! 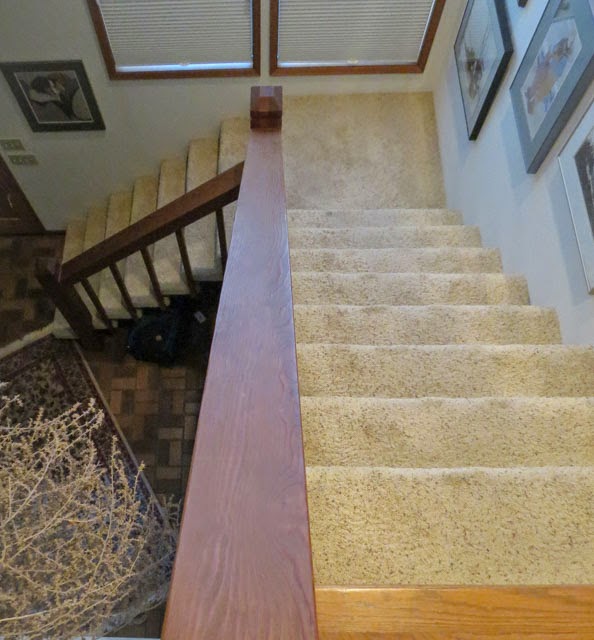 Last month I planned ahead and stocked the freezer with some easy-to-reheat items for RL to prepare as he assumed butler duties. Fruit with a toasted wedge of sourdough waffle or a microwaved frittata muffin has been a perfect way to launch each day, giving me plenty of energy to attack physical therapy and an ambitious exercise program.

My appetite remains light, often a salad or baked potato is more than filling for a meal, but a quick, reheated cup of soup has been a welcome, warming treat on these cold Autumn days. I do appreciate having a freezer stocked with some of our favorites.