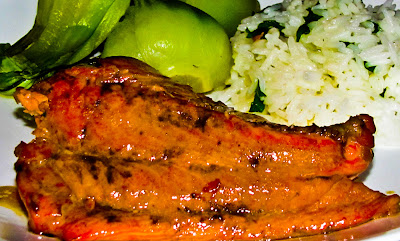 The Capt. couldn’t ignore the salmon jumping around the boat at Pavlof Harbor (link to Pavlof Cruise News post), he just had to go fishing. Wind had kicked up some chunky chop outside our protected anchorage so he settled for the calmer water inside the harbor. Did he plan to catch any salmon? It didn’t seem to matter; fishing was the activity of choice for the afternoon. We had fish in the freezer, fish in the fridge curing for lox, and had enjoyed fish for several meals already.  He hooked three coho and brought one back to the big boat.

Okay, I started one more batch of lox, and that left two nice tail pieces and some trimmings. The trimmings were tasty breakfast treats, the first batch of lox provided some lunch and appetizer snacks, and those two tail pieces didn’t warrant a barbecue preparation. Now what? It was time for a new experiment.

My new cookbook, Dishes and Fishes, touted a fast broil in a superheated cast iron skillet. It was worth a try… it it failed we could always have popcorn for dinner. The cookbook recommended a simple salt and pepper coating, but noted the method also worked with marinated fillets. Good idea, I was in the mood for something Asian. It took a scant two hours of marinating in a mix of teriyaki/Ponzu/seasoned rice vinegar, followed by patting dry, and those tail pieces were ready to go. Accompanied by braised baby bok choy and white rice, this menu was voted a keeper. No, it won’t take the place of our favorite BBQ Salmon with Special Sauce, but it was awfully good for an easy meal.

A short version of the directions: marinate the fish, heat a cast iron skillet at 500 for 20 minutes, dry the fish really well and place meat side down on the skillet. Place under the broiler and cook just until done.

Specific directions?.... I'll insert them soon, at my next internet connection.

It’s all about the method. Preheat the heavy cast iron skillet or grill pan, make sure the fish has been patted very very dry, and don’t overcook the fish. The method works well with almost any fish,  marinated or not.

Directions (my version)
If you have brined or marinated your fish, begin with step 2.