What’s happened to Brussels sprouts to make them so delicious? Those nasty, foul smelling, evil tasting little pseudo-cabbages of my childhood have been replaced by tasty morsels of pure delight. No really, they’re becoming my favorite Fall vegetable, right up there with kale, peppers and sweet corn.

I’m not alone in my enthusiasm, SeriousEats named Brussels sprouts their “2009 ingredient of the year”.  FraternityKitchen noted their surprising popularity as a stealth veggie this week. I have yet to follow the lead of adventurous chefs and foodies who put these little darlings on pizza, though that might be an interesting experiment. No, I enjoy sprouts as a side dish extraordinaire. Oven roasting is my favorite cooking method, requiring minimal effort and producing maximum flavor. It's always a bonus if there are leftover sprouts for me to enjoy for lunch the next day, or as a snack anytime.

I had a moment of potluck panic in September, and roasted Brussels sprouts came to the rescue. Lagoon Cove Marina hosts an afternoon Happy Hour during the cruising season. They serve prawns and everyone else brings an appetizer to share. Every afternoon… except when it’s different, like a special evening when there’s a dinner potluck. Drat! I was ready for appetizers, but it had been almost two weeks since a grocery store visit. The boat pantry didn’t have enough of any single item to feed a crowd. It was an uneasy feeling, offering Brussels sprouts to a crowd of strangers, uncertain if anyone else would enjoy them. Not to worry, my baking dish was empty long before most of the other sides and salads were finished. Who would have guessed that Brussels sprouts were so popular?! Or do you think it was the bacon?


We enjoyed this dish again last week when Graham joined us for dinner. This time I checked in advance, did he like Brussels sprouts? He reminded me that they had always been his favorite vegetable and I was the one who was the reluctant eater. Well not anymore, oven-roasted Brussels sprouts now top my delicious veggie list. 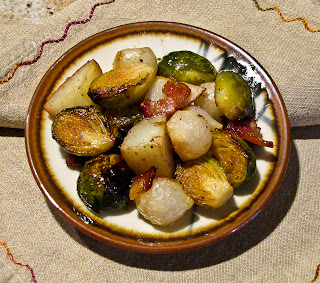 Oven-Roasted Brussels Sprouts with Potatoes and Bacon
Adapted from The Best of Fine Cooking: Side Dish 2007

Note: in an emergency, bags of frozen baby sprouts are a reasonable substitution. They do add more liquid to the dish, which can inhibit browning. It would help to slightly precook the bacon and potatoes to help them crisp up a bit more, without the risk of overcooking the Brussels sprouts.

Email ThisBlogThis!Share to TwitterShare to FacebookShare to Pinterest
Labels: bacon, side dish, vegetables