I would love to embark on a leisurely eating tour through Louisiana. Just imagine meal after meal of Creole and Cajun cooking, dining on gumbos, etouffees, jambalayas, crawfish and barbecued shrimp, blackened redfish, grillades and grits... the list goes on. And then there's beignets, pecan pie, red velvet cake, and more. Well, it's not happening this month, but I can dream, and I can do some Louisiana style cooking at home.

Monday was a wet, gray Seattle day and called for some easy-to-cook comfort food. Red beans and rice are traditional Monday fare in New Orleans. Typically there would be a ham bone left over from Sunday dinner, and since Monday was a busy wash day, home cooks needed a meal that could simmer untended for hours. I didn't do any laundry on Monday, but the slow-simmering beans left me the whole morning to focus on other things before enjoying a wonderful lunch with friend Pat L.

My version of red beans and rice has evolved from a 1980 recipe in Bon Appetit. It calls for pre-soaking the beans overnight, and then doing a bit of chopping and dicing before setting things to simmer. I didn't have a ham bone, so I substituted bacon. Instead of cooking the beans in water, I used chicken broth and a bottle of beer. I also added garlic and a few more spices than the original recipe called for, and next time might make other adjustments, but it won't matter too much. The creamy smoothness of the beans plus the spicy heat of the sausage account for most of the appeal of this dish. 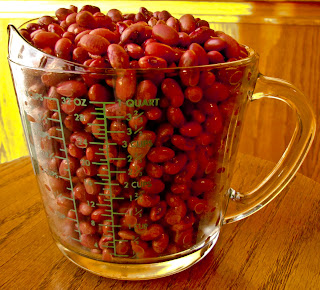 Photo: A one-pound package of dried beans yielded over a quart of soaked beans. 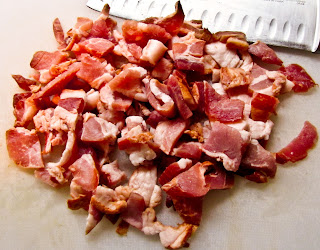 Photo: Bacon substituted for a ham bone in Monday's batch of red beans and rice. 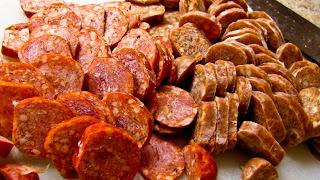 Photo: Coins of andouille sausage and a spicy smoked pork sausage with chiles. 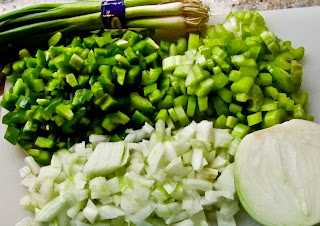 Photo: The "trinity" of green pepper, celery and onion, ready to saute in bacon and sausage drippings. 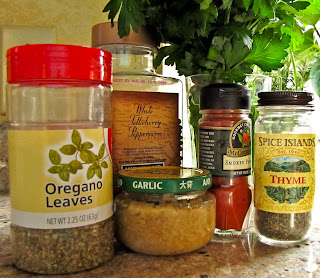 Photo: Just a few of the seasonings that went into the pot. Somehow bay leaves, cayenne, chicken stock and beer didn't make the photo op. 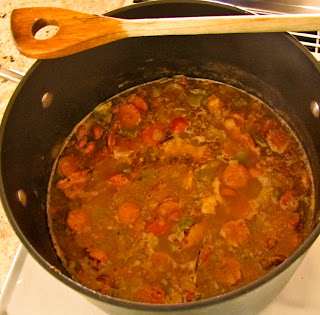 Photo: Finally, everything is simmering away, perfuming the entire house, whetting my appetite and prompting countless taste tests.


6 cups chicken stock and a bottle of beer

Directions:
Rinse beans thoroughly and discard any bad ones. Place in Dutch oven, cover with 2 quarts water and bring to a boil. Turn off the heat, cover the pot and let the beans soak overnight or at least several hours.

Drain the beans and set aside.

Dice the bacon; put into a Dutch oven and cook over medium heat until cooked but not crisp. Remove from the pot and set aside, but leave the drippings behind.

Slice the sausages into 1/4 inch coins and saute in the bacon drippings until lightly browned. Remove from the pot and set aside, but leave the drippings.

Chop the onion, celery and green pepper into medium dice and saute in the meat drippings for 5 minutes. Add the thyme, cayenne, black pepper, smokey paprika (pimenton) and garlic and saute for 1 to 2 minutes until fragrant.

Add the bay leaves and stir the meats back into the pot; cook for an additional 5 minutes.

Add the presoaked beans, chicken stock and beer.
Set over medium heat, bring to boil, then reduce heat and simmer about 2 hours.

Remove the bay leaves. Using wooden spoon, mash about 1/4 of beans against side of pan to give a creamy smoothness (or use immersion blender). Cook at a very low simmer for an additional hour.

Note: Don’t chop vegies too small or they disappear and mush up the pot. Don’t mash so many beans that it resembles refried beans, keep it chunky.

Email ThisBlogThis!Share to TwitterShare to FacebookShare to Pinterest
Labels: entree, side dish