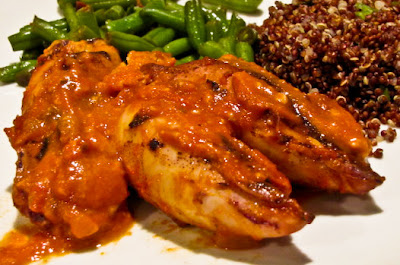 I don't cook squid very often, in fact I go for months at a stretch without eating it or even thinking about it. But on a wander through Uwajimaya this week I was drawn to the seafood case and zeroed in on the tray of squid. I saw the array of glistening cephalopods, lined up soldierlike in precise formation, and my brain first registered "Wow! they look good", followed by "seafood-for-two priced under $3.00!" Eight large squid were selected, weighed and wrapped in record time and then joined the baby bok choy, lemongrass, kim chee and pickled ginger already in my cart.

I usually buy calamari steaks and prepare them piccata-style with a lemon caper sauce. But this batch of squid was simmered in a Mediterranean manner, stuffed and nestled in a tomato sauce. Served with quinoa and bacon/balsamic green beans, the savory stuffed squid dinner rated two thumbs up.

Cephalopods have arms/tentacles attached to their head with a body/mantle trailing behind, not to mention changeable colors and an ink-jet defense system. I think Nature had a sense of humor when creating the squid. 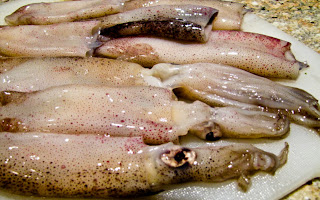 Cleaning squid is time-consuming, but simple. First step - separate the body parts. Discard the head, finely chop the tentacles and clean out the mantle. 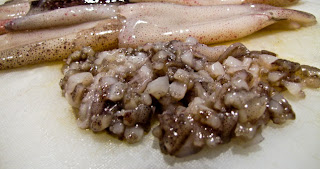 Dice the stuffing ingredients and place in a bowl. This stuffing mix included chorizo, onion, Italian parsley and a mixture of cheeses. 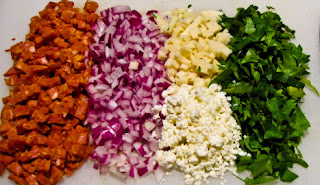 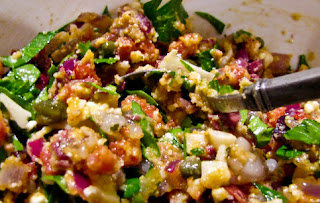 The fun really begins with forcing the stuffing mix into those flexible tubes. It helps to put the stuffing into a plastic zip-loc bag, snip off one corner, and pipe the mixture into the body. The use of fingers is recommended to help fill the squid tube. Caution: stuff the tube lightly, or it might split during cooking. 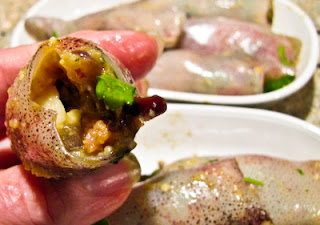 Secure the open end with a small skewer or a toothpick. Add a thin coating of spaghetti sauce to the baking pan or dish, and arrange the squid on top. 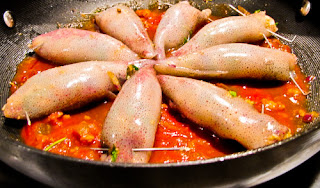 Top the squid with the remaining sauce. Cover the pan with foil and bake. 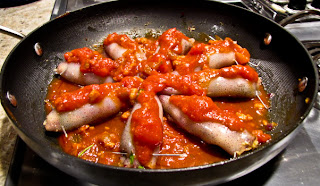 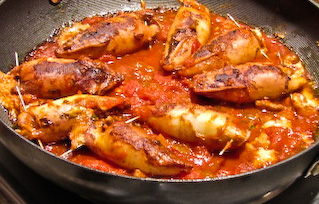