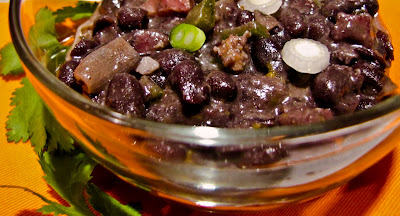 Black bean soup provides a world-class cure for the winter weather blahs. It’s true, this soup wraps a comforter around your shoulders and beams sunshine on your soul. January has officially been declared Soup Month, and black bean soup is a fine choice to celebrate the occasion.

We have enjoyed this soup for decades, although the recipe and the toppings have changed a bit over the years. An old secret ingredient (orange halves, rind and all) came via my Mom from a Los Angeles Times clipping in the ‘70’s, while chorizo is a more recent addition. Who knew about chorizo in the 70's? Some versions have featured chopped chiles, while others added chopped carrots and celery. Each recipe tweak adds a new flavor nuance without changing the basic character of the soup - unless you are picky about authenticity.

Cook's Illustrated: Soups does a masterful job of explaining how they fine tune a recipe for flavor, texture, appearance and ease of preparation. The black bean soup recipe covered less than a full page of text while the development notes took a page and a half. The old Time-Life classic, The Good Cook: Soups fits two black bean soup recipes on three-quarters of a page! Ingredient lists and simple directions are routine , but in the Time Life cookbook I miss the story of recipe creation. Reading the Cook's Illus. narrative - what worked, what failed to make the cut, and why - helps guide my recipe "tweaks".


Is black bean soup a Cuban/Caribbean standard? a TexMex classic? I suppose the answer depends on the source and some minor differences in ingredients. Beans, garlic, onions, cumin and bay leaves are components of dishes in many regions. With the exception of the specific bean, even the recipe for Red Beans and Rice doesn’t differ greatly in ingredients or procedure, but it is definitely a Creole/Cajun dish. Whatever the attribution, this soup is a winner. 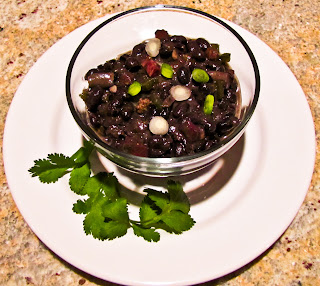 Black Bean Soup
Based on The Best Recipe:Soups and Stews by the editors of Cooks Illustrated, with influences from a host of other recipes over time.
Serves 6-8

Cooking the Beans:
1. Soak the beans overnight, adding enough water to cover by at least 2 inches, OR bring the beans and water to a boil, remove from the heat, cover and let stand for 1 hour.
2. Drain the soaked beans, discarding the soaking liquid. Place the beans, ham hock, salt and pepper, water and broth in a large stock pot. Bring to a boil; reduce the heat to low and skim off the scum as it accumulates.
3. When no more scum rises add the onion, garlic, bay leaves and orange halves; stir and return the pot to a low boil. Simmer, partially covered, for about 2 hours or until the beans are tender but not yet bursting.
4. Remove the orange halves from the bean pot. Remove the ham hock and let it cool. Remove the meat, leaving behind the bone, skin, gristle and fat. Cut or shred the meat into bite-sized pieces and stir it back into the bean pot. Adjust the seasonings.

Preparing the Sofrito:
1. Heat a large skillet over medium heat. Add the chorizo and saute until it renders its flavorful oils.
2. Add the onion and red pepper and saute until softened, but not browned, 8 to 10 minutes.
3. Add the garlic, oregano and cumin and saute until fragrant, about 1 minute.

Finishing the Soup
1. Scoop 1 1/2 cups of beans (use a slotted spoon) and 2 cups cooking liquid into the sofrito mix. Mash the beans with a fork or potato masher until smooth. Simmer, uncovered, over mdium heat, until the liquid is reduced and thickened, 5 to 10 minutes.
2. Add the sofrito mixture to the bean pot. Simmer, uncovered, until the flavors blend, about 15 minutes.
3. In a small bowl mix the cornstarch with 2 tablespoons cold water and form a smooth paste. Stir the paste into the soup and stir until thickened, about 5 minutes.
4. Remove and discard the bay leaves. Stir in the lime juice and adjust the seasonings.
5. Ladle the soup into individual bowls; optional toppings include sour cream, cilantro, hardboiled egg bits, lemon slices and/or chopped onion. (We like to place lemon slices in the bottom of the soup bowl, cover them with soup and toppings, then press the lemons as we eat to release more citrus flavor.)
6. Serve immediately, with several choices of hot sauce available. (Green Tabasco is a winner.)

Notes:
1. The soup tastes best the next day, after the flavors mellow and blend.
2. If pressed for time, 5 cups of canned beans, drained and rinsed, can substitute for 2 1/2 cups of the dried. Remember to use less liquid and to reduce the cooking time so the beans don’t turn to mush. Canned beans work, but I prefer the finished result using dried beans.
3. When drained the beans make a good SW side dish, can be the base for refried beans, or even fill a taco or burrito.