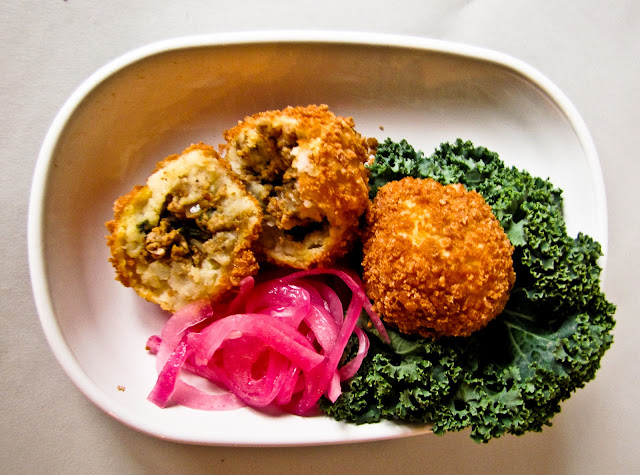 A quick read through Kathlyn’s March challenge post brought to mind several other "filled" foods; Salvadorean pupusas, Polish pierogi, Indian samosas, Latin empanadas, and the list goes on. One notable difference stood out, Papas Rellenas traditionally have a filling encased in potatoes, not in a flour or masa dough. Potatoes! reminiscent of a British cottage pie or shepherd’s pie, perhaps? Dough, bread or potatoes wrapped around a savory filling, and baked or fried - that could describe comfort food in many cultures.

I procrastinated this month, leaving the challenge until the last possible moment. What was I thinking? Sigh, I could relate to the drooping daffodils outside the kitchen window, me feeling a wee bit stressed while the flowers struggled against rain and wind. 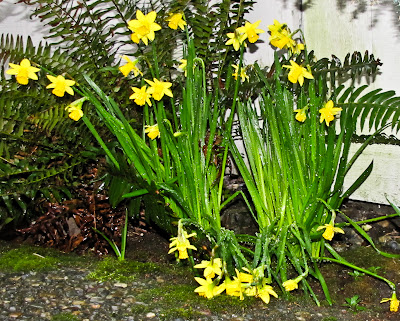 The March Daring Cooks' Challenge was to make one or both of the posted recipes, an option I truly appreciated this month. Thank you, Kathlyn! It was no surprise that once I busied myself in the kitchen - chopping vegies, riceing potatoes, sauteing and stirring filling, forming and frying the Papas - any lingering stress disappeared from my day.The following decisions helped me out too.
1. Ignore the ceviche portion of the challenge. Been there, done that many times, so provide a link to my previous halibut ceviche post. (here) 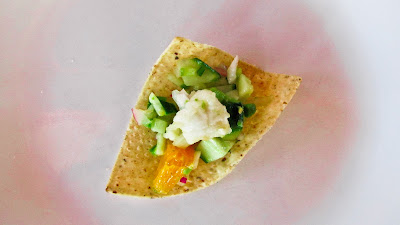 2. Use Kathlyn's suggested method, but substitute the filling ingredients from my lamb merguez sausage recipe.(here) I had everything in stock so that eliminated a trip to the store. 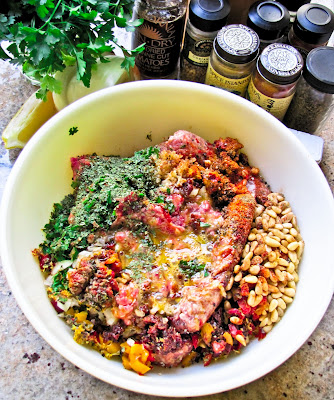 3. Add additional vegetables to the Salsa Criolla, just in case we decided mid-dinner to switch the entree to lamb burgers or tacos instead. 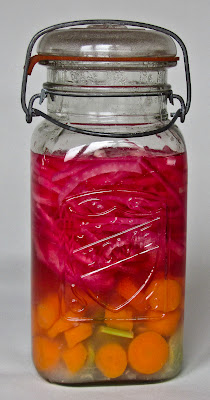 The Good News:
The many varied parts of the recipe were completed in one afternoon, albeit a long one.
RL enjoyed the Papas Rellenas, and we already know he loves ceviche. ("Why bother cooking halibut any other way when this is so good?!")

The Rest of the Story:
Procrastinating right up to the last day meant it did take the entire afternoon to prep, cook, dine and photograph... and that still left some writing to do. (So here I sit, after midnight, editing like crazy.)
The kitchen is a mess, the stove glistens with grease droplets, the house reeks of oil, and yes, I really did enjoy The Papas Rellenas Experience.

Did We Enjoy the Dish?
I liked it, but didn't love it: too little filling in too much potato. Perhaps forming a small meatball first, then coating it in a thin layer of potato, would be a workable alternative.
RL was more enthusiastic: he loved the crunch of the crust, and had fun evaluating the taste effect of different sauces and condiments. Salsa Criolla was his favorite, though HP Sauce ranked right up there.

Would I Prepare it Again?
Probably not, but I won't hesitate to share a small plate of Papas at any local Latin restaurant.

Papas Rellenas (de carne)
Made 6 small papas and 4 larger ones (with 1.5 cups of potato left over)

For the dough:
2¼ lb russet potatoes
1 large egg
Salt and pepper, to taste

While waiting for the potatoes to cool down, before finishing the dough, you can

Make the filling:
I used a 1/4 recipe of my Lamb Merguez ingredients, adapted to Kathlyn's suggested method.
While the filling is cooling, you can assemble the ingredients...
For the final preparation:
1 large egg, beaten
1 cup AP flour
Dash cayenne pepper
Dash salt
1 cup dry or fresh unseasoned bread crumbs or regular panko
Oil for frying (2” deep in a heavy pan, like a medium-sized dutch oven)

Forming and frying the papas: 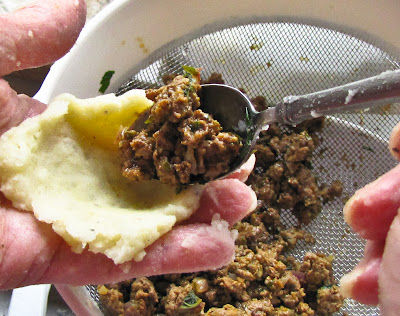 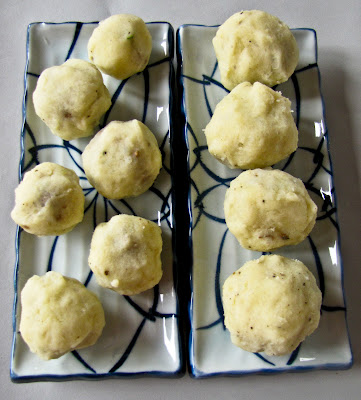 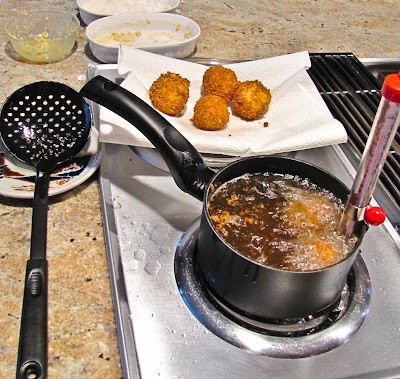 Serve immediately with salsa criolla and/or other sauces of your choice.

Note: I blanched chunks cut from 2 medium-sized carrots and 2 celery stalks and added them to the mix. That required additional liquid to cover: a 60/40 mix of water and vinegar, juice from additional limes, 1 heaping tablespoon of sugar, and a generous splash of juice from a jar of pickled jalapenos.