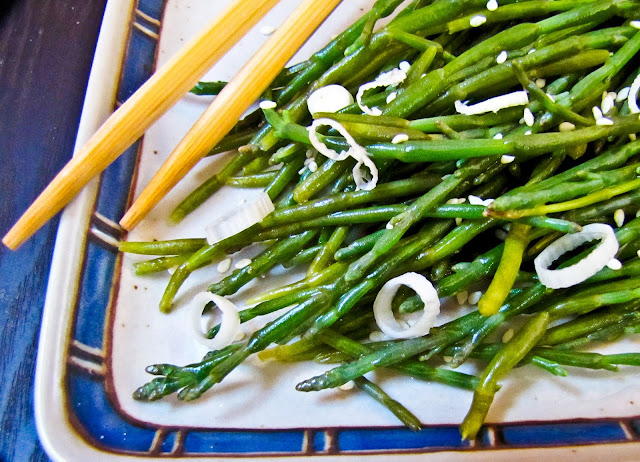 What is sea asparagus? It’s not really an asparagus, not even in the same family of plants, but Salicornia virginica is commonly known as “sea asparagus”. It is also called American glasswort, perennial saltwort and Pacific samphire. This intertidal perennial is found all along the Pacific Northwest coast in saltwater marshes, on tide flats and on beaches. It thrives on shores that don’t have strong wave action and surf. (ref. Plants of the Pacific Northwest Coast, Pojar and Mackinnon) Common in the upper intertidal zone of many shores, you will find it in the company of goose tongue and fucus.

I’ve gathered sea asparagus in the past, have even steamed it and tossed it with butter to serve as a sidedish oddity. It has the texture and crunch of a thin green bean, without the bean’s flavor to recommend it. It’s fairly tasteless, unless you consider salty a flavor. An unusual vegetable, it’s not something I usually seek out.

I didn’t search for it this time, but kept crunching through it as I tromped along a rocky beach in Appleton Cove. I guess the sea asparagus found me. I enjoy the tangy shreds of ocean salad as a side dish with sushi or summer rolls and wondered if a dish of pickled sea asparagus might serve the same purpose. 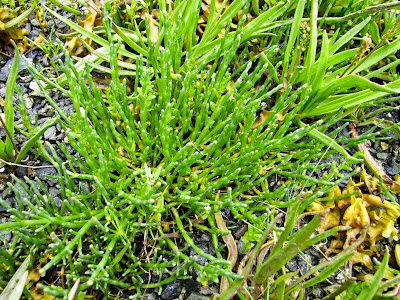 Just for fun I picked a sackful of the small, tender shoots for the following pickling experiment.
The result was surprisingly good. Sea asparagus won’t make the team as a weekly vegetable offering, but its tangy crunch could earn it an occasional backup role as a condiment. Try it as a topping for steamed rice or cold soba noodles. Caution: it remains a very salty vegetable.

Email ThisBlogThis!Share to TwitterShare to FacebookShare to Pinterest
Labels: side dish