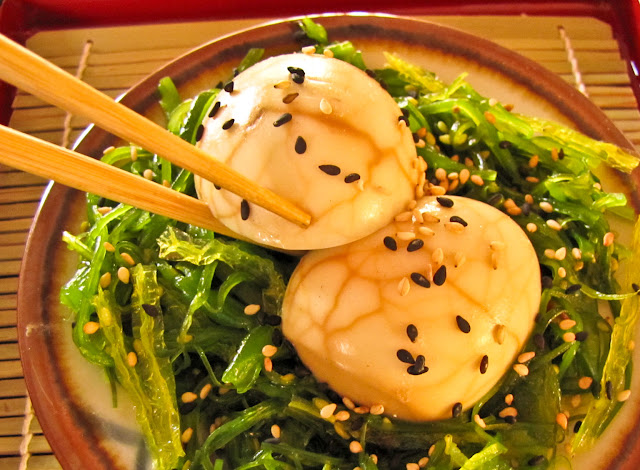 Hard-boiled eggs are so basic, so ordinary, so taken for granted. Ditto for tea, that ubiquitous drink. But not so much in November as the Daring Cooks worked with tea. Sarah from Simply Cooked was our November Daring Cooks’ hostess and she challenged us to create something truly unique in both taste and technique! We learned how to cook using tea with recipes from Tea Cookbook by Tonia George and The New Tea Book by Sara Perry. I was intrigued by the weblike, marblized appearance of Chinese Tea Eggs and decided to focus on this classic Asian dish.


Most of the tea egg recipes I found called for Chinese five spice powder, an ingredient not currently stocked in my spice pantry. While I could have run to an Asian market to buy some, it was more fun to research the ingredients for this seasoning. Five spice powder is traditionally composed of cinnamon, fennel seed, cloves, star anise and Szechuan peppercorns. Bingo! I had all five items on hand, each one contributing to the traditional flavor mix of bitter, sweet, sour, salty, and savory. I toasted them, then decided to use them whole rather than grinding them into powder.


The technique was both simple and familiar, reminiscent of coloring hard-boiled Easter eggs. I had used this procedure before: boil several eggs, crack their shells and then submerge them in beet juice or water tinted with onion skins or food coloring for an interesting effect. The resulting eggs were always quirky and unpredictable, but still tasted like ordinary hard boiled eggs.


The Chinese Tea Eggs surprised me with their subtle, yet distinct flavor. Anise and ginger were the stronger notes, sweetly softened by muted hints of the cinnamon, soy and citrus. The tea did not come through as a flavor, or perhaps it was too subtle for me to pick up. The faintly Asian flavor seemed a good match to the unusual, antiqued appearance of these eggs. (OMG, did that begin to sound like a pretentious wine review?!)


We each sampled a chilled egg, accompanied by seaweed salad and flavored rice balls -- tasty, but one tea egg apiece was sufficient. I would make them again, but RL isn't in a rush to eat another one.


I used the remaining eggs to make deviled eggs, adding a few drops of Ponzu to my usual mayonnaise/mustard mixture. Mmmmmmm, these disappeared quickly, almost before I could grab a photo. Once again, I enjoyed them, but RL was not a fan. I'll have to stop asking his opinion, or just prepare Chinese Tea Eggs for myself next time.


Note: Serve hot or cold, as a snack with rice or as a stand-alone side dish.