Memory fails me at times, little details disappear, and it's a bit annoying. Why did I buy a package of almond flour/almond meal, was it some new recipe that appeared tempting? I wonder what it was... or when it was... and why didn't I follow through? At least I know the package came aboard in 2012, since I write the purchase date on everything I stock on the boat.

That small, puzzling package came in handy yesterday when we had dinner guests. RL manned the BBQ for his famous barbecued salmon (link), I prepared sides of Mixed Pepper Salad and Potato Salad, and toasted some garlic cheese baguettes. The menu was hearty so I knew dessert should be light, perhaps grilled fruit or sorbet and cookies. We filled our plates at the buffet and, as predicted, no one had much room for dessert. Skip the grilled peaches, pass on the sorbet, but oh my, watch the pile of chewy little cookies quickly disappear. 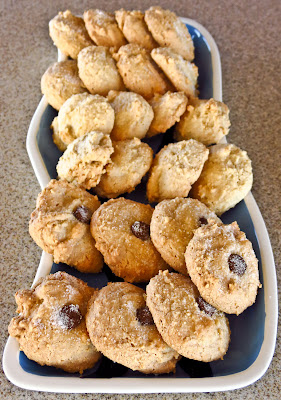 Yesterday the cookies were crisp on the outside with chewy interiors, reminiscent of a coconut macaroon without the coconut. Today we nibbled away on the remaining half dozen and found them crunchy throughout... the verdict? delicious either way.

For the next batch I'd process the batter longer, aiming for a smoother texture. Grinding the sugar finer might help too, if I don't purchase special Baker's sugar as suggested in the original recipe. My food processor struggled to incorporate the last 2 egg whites and create a smooth batter before the dough clumped into a lumpy dough ball. I'll use the stand mixer if I bake these at home. (In a perfect world there would be room for the KitchenAid in a boat galley!)

The basic amaretti recipe invites playing with flavors, like substituting lemon or lavender for the vanilla, something to complement the heavy almond lusciousness. Another day perhaps, since I have some almond flour left to work with.

2 1/2 cups almond flour or almond meal
1 1/4 cups Baker's superfine sugar
3 egg whites
1/2 tsp vanilla extract (I used 1 tsp)
1 tsp almond extract (didn't have any, so substituted 1/2 tsp lemon oil and 1 tsp ground lemon zest)
Extra sugar to sprinkle on top
Update Note March 14, 2013
I tried a batch today using egg whites from a carton. The package suggested 3 tablespoons of egg white as the equivalent of 1 extra large egg. The 9 tablespoons of egg white were w-a-y too much liquid and produced flat cookies. I'll use a 2 tablespoon equivalent next time IF I use egg whites from a carton.