A fast and flavorful red-sauced pork chili with beans. 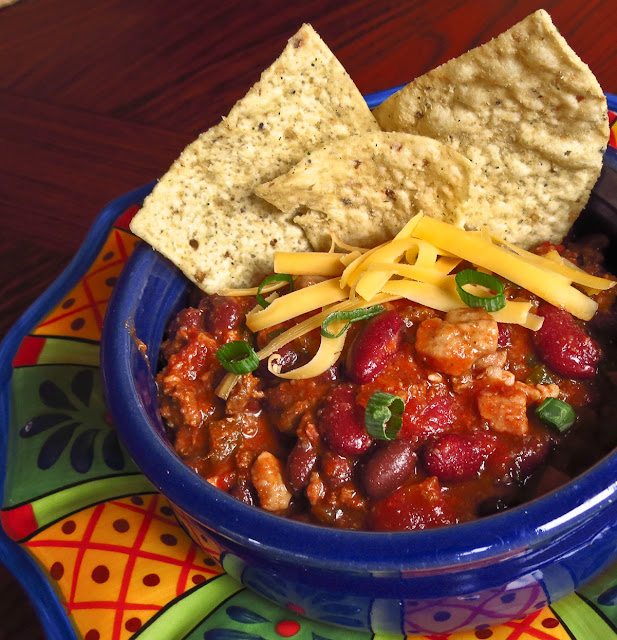 Fall weather finally kicked in with windy gusts of rain and cool temperatures, but after 80 days of record-breaking dry, warm sunshine I'm not complaining. After all, this is the Pacific Northwest, and cooler weather just signals the beginning of slow cooking season, a time for soups, chilis and stews. Mmmmm, mmmmm good... except when you are in a rush and haven't planned ahead. Like yesterday.

With a hungry husband and my own grumbling stomach for encouragement, I put together a new chili recipe for our late lunch. As he finished his second bowl of chili, RL asked, "Did you write down the recipe? I'll want this one again."

Write down the recipe? while I'm slicing and dicing and stirring and tasting? No way! but it was easy to scan the mess on the countertops and stove to remind me of the ingredients and jog my memory as to the the steps involved. Chili recipes are only guides, a basic formula to adjust and embellish a bit differently each time I cook. Surprisingly small changes can make a noticeable difference in flavor; even resting overnight in the fridge can mellow out a batch of assertive seasonings. Julia Child shared a few similar thoughts in her book From Julia Child's Kitchen:

...few cooks, once they have mastered a recipe, want to do it exactly the same way twice--that's a pedestrian and boring way to cook....the main theme of the recipe is in your memory bank, and you can begin to have fun with variations of your own.Now you are really cooking.

This quick chili is a bit non-traditional. My usual pork chili features tomatillos, not tomatoes... verde not colorado. In our local TexMex restaurants, chili colorado is all about beef, not pork. Chili beans are typically a side dish, an accompaniment and not cooked with the meat in the chili pot. No matter, we're not strict chili traditionalists, it's all about flavor. The ingredient list appears lengthy, but this is not a complicated chile. It's just 3 kinds of pork, some onion, seasonings, tomatoes and beans simmered in a broth. It is simple and quick to prepare, but oh! so tasty... and that's not just due to major hunger pangs before lunch.