Carrot Soup with Ginger and Orange


For years the Pasta & Company store located in Seattle's University Village has posted a featured Soup of the Day on a chalkboard outside its entrance. Off and on I've wondered what their carrot soup tasted like, but I've never actually tried it. Was it Carrot Ginger Soup? Carrot Cilantro Soup? Carrot Curry Soup? It always sounded intriguing, but I guess not quite tempting enough. RL isn't fond of   doesn't eat  hates cooked carrots, so that may have been a factor. But today, with pounds of carrots in the fridge and RL away for the day, it was time for me to play with a carrot soup of my own. Finding a ton of recipes in cookbooks and online for reference, I chose ingredients I enjoy that might play nicely together.

Here's a photo of the cast of characters, all ordinary pantry items found in most kitchens. That chunk of bread, rosemary olive oil sourdough, was initially intended for toasted croutons to accompany the soup. Sudden hunger pangs caused me to change the plan and make a toasted cheese sandwich instead. You can see a few remaining wedges in the photo at the bottom.

Step 3 in the recipe makes it look like you are preparing baby food, a totally unappealing puree, but press on. The soup soon improves in both taste and appearance. 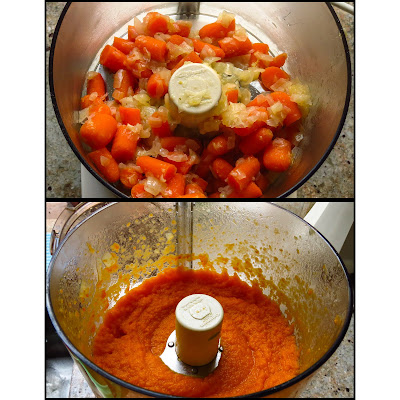 This was a perfect light lunch today, tasty and filling but not too heavy. (The missing other half of the sandwich doesn't really count as lunch; it was an emergency late-morning snack consumed long before the soup was ready.) RL might not love carrot soup, preferring something without cooked carrots, a chunkier soup, one more robust with spicy flavors, but today that wasn't an issue. He wasn't home for lunch so he didn't get to vote.

Onions, carrots, ginger and an orange accounted for the subtle layers of flavor. The orange juice and grated zest offered a citrusy note to balance the mild sweetness of the onions and carrots. A warm bowl of soup benefitted from the slight sour tang of lime juice added at the end. Chilled, the soup was delicious with sour cream and a bit of cumin stirred in to finish. Shredded mint or cilantro also merit a future taste test as optional toppings. Carrot Soup might not make our regular soup rotation, but it worked well for lunch and could be a simple first course for a multi-course dinner. I wonder how it compares to the Pasta & Co version that I've never tasted.


Optional Toppings: swirl in a squirt of lime juice, or add a dollop of sour cream, or dust with a sprinkle of cumin or a scattering of fresh mint shreds.