The tantalizing roasted pepper aromas wafting out of the kitchen this week were inspired by a SW Stuffed Pepper recipe I found at my SRC assigned blog, Mostly Food and Crafts (link). That site is bursting with recipes, craft ideas, kid projects and a gazillion linky party connections. Wow, Danielle is one busy blogger keeping up with all of that and two active children.

The Secret Recipe Club assigns its members a new blog to explore each month, and I explored the MostlyFood archives like crazy, mentally tasting and bookmarking some interesting recipes to try soon. Michelada? Eggs in Hell Veges? I love the spices and flavors of the Southwest, so it's no surprise that a SW stuffed pepper recipe caught my attention. Since April has been w-a-a-y too busy for me to linger long over meal prep, I tweaked Danielle's recipe to cut down on the cooking time. After several days of small-batch trial and error two preps were deemed successful. Method 1 utilized the microwave and Method 2 pre-roasted the pepper. There were also a few ingredients changes, nothing too drastic and still keeping to a SW flavor profile. The original recipe is posted below, with my substitutions and changes noted in red. Compare the original with either alternative method: give all three preparations a try, or create your own variation.

My basic stuffing ingredients included: quinoa cooked with a package of frozen spinach, crumbled and cooked chorizo sausage, defrosted frozen corn, pepper jack cheese, cumin, green onions, peppers/chilies plus salt and pepper that are not pictured. Next time I might add a drizzle or two of cream to bind the mixture together. (Note: I did not precook the corn or reheat the filling mixture. Three minutes in the microwave and quick hit under the broiler heated the pepper shell and the stuffing quite nicely.) 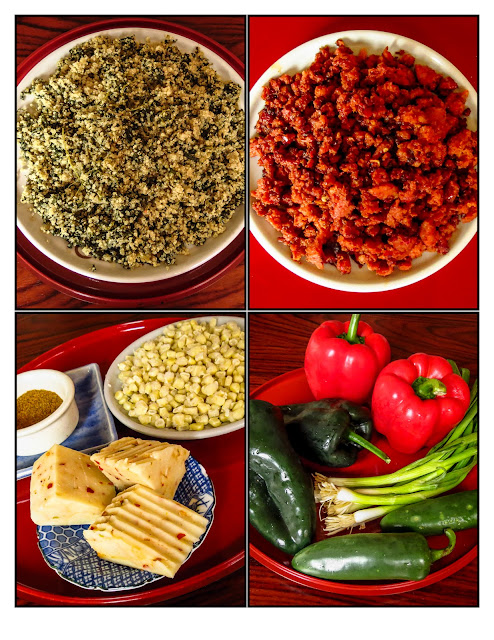 Method 1: Cut a red pepper in half, remove the seeds and veins and fill loosely with some stuffing mixture. Place in an oven and microwave-proof dish, cover tightly with plastic wrap, and cook in the micro for 3 minutes. Remove the plastic wrap, sprinkle with additional shredded cheese, and place under a preheated broiler until the cheese bubbles. Serve warm with salsa and sour cream or Greek yogurt.

Method 2: Broil a poblano pepper until blistered on all sides. Let cool until you can handle it and peel away the blistered skin. Carefully slit the body in a T-cut, remove seeds and inner veins and fill loosely with some stuffing mixture. Place in an oven and microwave-proof dish, cover tightly with plastic wrap, and cook in the micro for 3 minutes. Remove the plastic wrap, sprinkle with additional shredded cheese, and place under a preheated broiler until the cheese bubbles. Serve warm with salsa and sour cream or Greek yogurt. 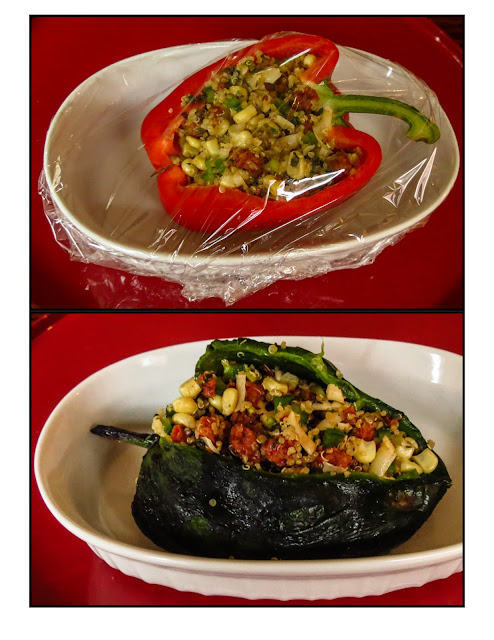 Now how easy is that?!? The peppers/chilies and filling are tender, moist and oh! so flavorful. Poblanos can be a bit "peppy", so if you are not overly fond of chili heat I'd omit any jalapeno or use a few canned peppers . Or you could just add more sour cream topping to your serving; dairy is reputed to moderate the chili heat. The jalapeno seemed less assertive in the sweet bell pepper shell, but it still had a noticeable bite to it. Still too peppy sounding for your taste? Skip the jalapeños and substitute plain jack cheese for the pepper jack. Prefer a meatless version? Substitute mushrooms or black beans for the sausage.

Recipe found at MostlyFoodsandCrafts, with my changes in red

Directions:
Now checkout the other Group B posts for this month.