Giddy Over This Sweet Soy Glaze 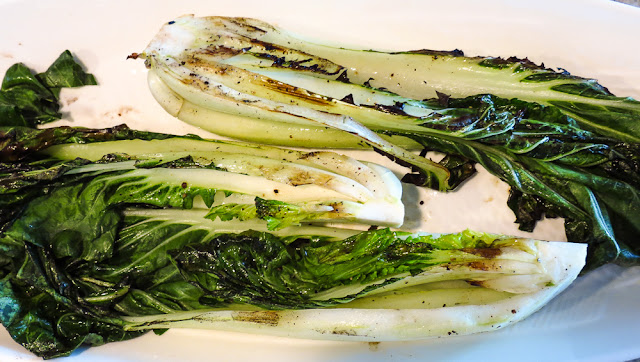 We're grilling' and chilling' this week, cooking outside as we relax and enjoy the late summer sunshine and warm weather. The old charcoal grill hasn't seen much action since we switched allegiance to a newer gas grill, but it's large surface was perfect to hold three wide pork chops and some large bok choy. (Hah! autospellcheck really wanted to substitute "book toy" for bok choy... more than once.)

Baby bok choy had been the lead item on my produce shopping list, but our local grocery didn't have any. None. Not one. How can you not stock that cute little Asian cabbage in Seattle, a city with a significant Asian population?! I settled for the larger variety of bok choy... much larger, in fact. Now what? Grilled bok choy by itself didn't hold much flavor appeal, but oh! my! the many sauces and glazes I found online were beyond tempting. Which one to try?

I went with a Kenjii Lopez-Alt recipe found on SeriousEats: Grilled Bok Choy with Sweet Soy Glaze. Kenjii's recipes never disappoint, and his accompanying posts typically include interesting factoids and/or useful tutorials. The posted version called for baby bok choy, but the size difference didn't seem to matter. Preparation was simple and the usual veggie grilling steps applied:
Results? That soy/sake/seasonings reduction would make cardboard taste terrific... ok, that might be a slight exaggeration but it was amazingly better than anticipated considering the simple ingredient list. The ginger and soy flavors were strongly taste forward; sweet, but not cloyingly sweet. Asian in character, but easy to adapt and substitute ingredients to adjust to individual taste preferences. Myself, I'm a huge fan of the original, though a hint of anise does sound intriguingly tempting. 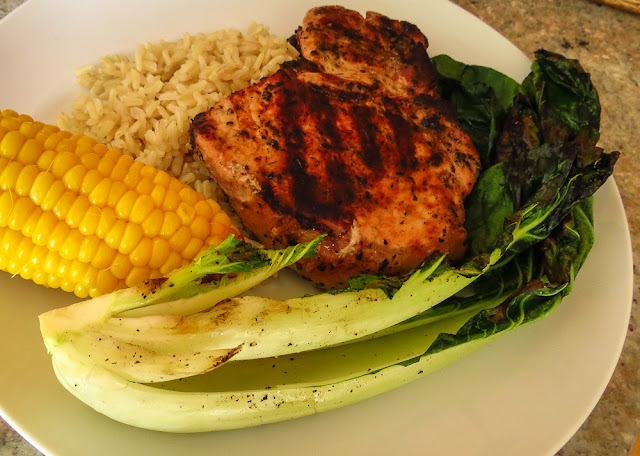 The glaze was intended for the bok choy, but we slathered it onto the grilled Asian-marinated pork chops, drizzled it over Jasmine brown rice, and even slurped some off spoons. Jars of this reduction will become a standard go-to item, stored on a fridge shelf and ready for action throughout the weeks to come. You really need to try it. Soon. As for the big bok choy, I can recommend grilling it... just as long as you have a flavorful, assertive Asian sauce to drizzle over its charred surface. 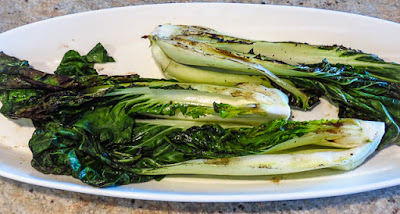