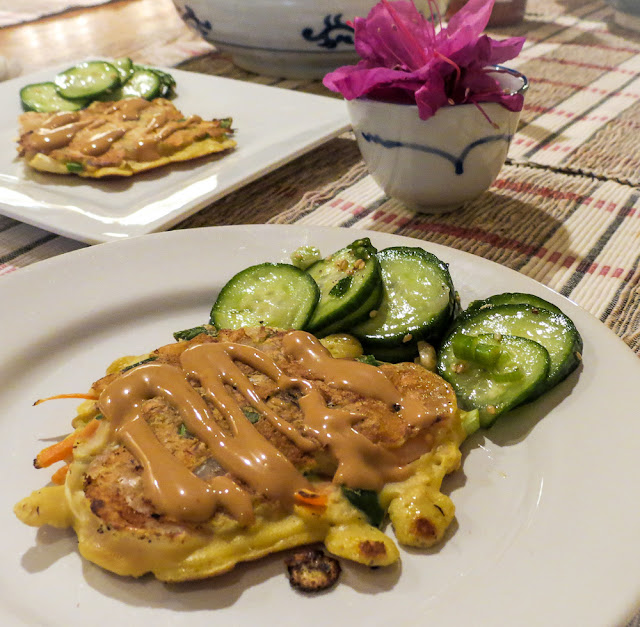 My iPhone camera roll is out of control! Too many pictures in too few albums make it impossible to locate anything quickly. Last week I decided to tackle the disorganized mess, discard the surplus shots and organize the rest. Like several other ambitious plans, an enthusiastic start soon bogged down in the details. Progress slowed as I gazed at each shot, flooded with memories of the occasion. So many photos recalled special friends, fun adventures, brief moments of scenic beauty, tasty meals, etc. Gazillions of shots still need organizing, but I did find a cache of food photos, perfect for menu planning inspiration. Those colorful restaurant food shots reminded me of countless tasty meals, prompting an online search for recipes.

This amazing okonomiyaki luncheon plate shown above, an October 2014 daily special from Arnie's in Edmonds, topped my newly-inspired "must make" list. Two airy pancakes, plated atop braised spinach and a puddle of tangy sauce were so tasty I didn't want to share a single bite... though I probably offered, just to be polite.

This week Hilary ran across the okonomiyaki recipe in my Food52 cookbook and recalled enjoying this Osaka specialty treat during a recent trip to Japan. 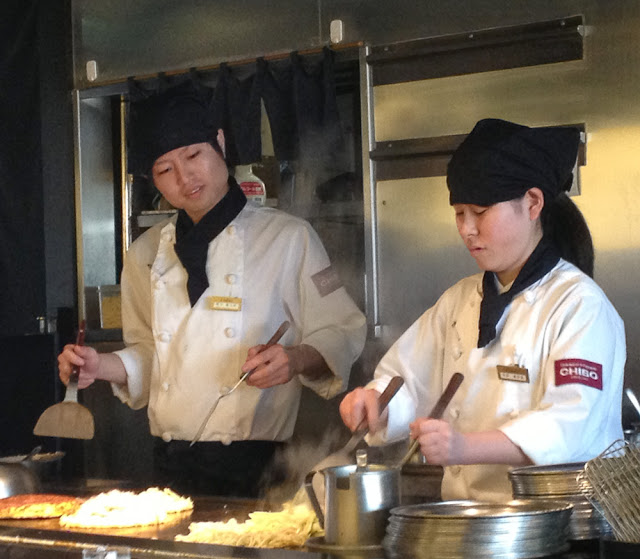 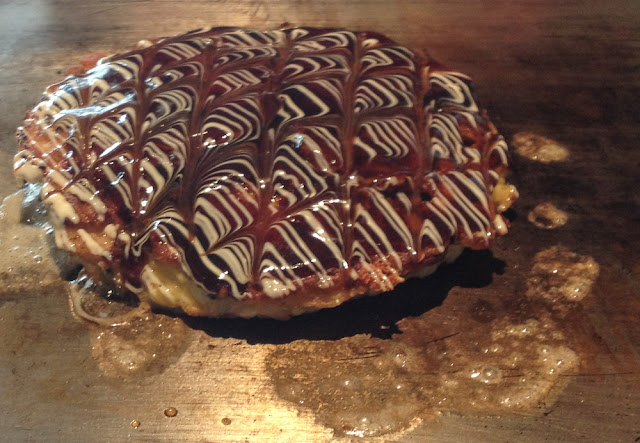 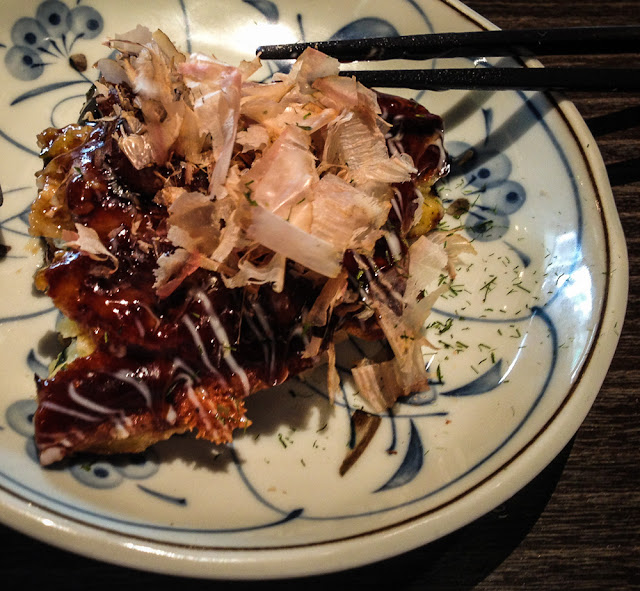 I have made these savory cabbage and shrimp pancakes before (link), but wasn't thrilled with the results. Now, with renewed photo inspiration and a kitchen helper, it was time to revisit this delicious savory treat. 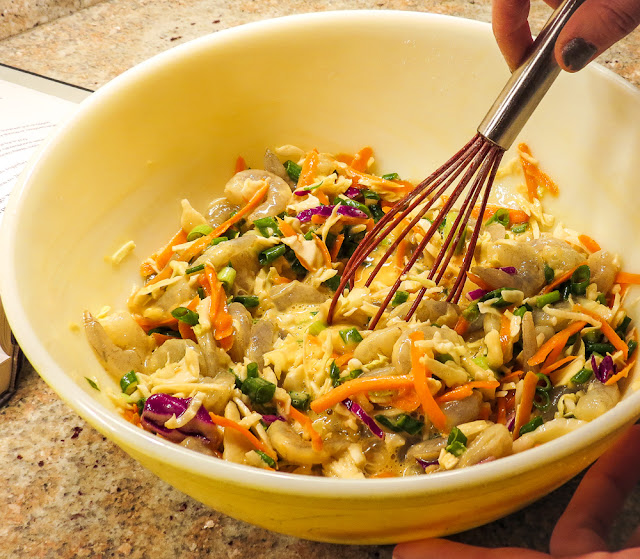 Hilary mixed the ingredients, aiming for a loose egg batter that would produce crispy, crepe-like pancakes. Ron grabbed a spatula and joined the party at the stove. We soon had two skillets heating on the cooktop, the oven warmed and a bowl of dipping sauce mixed and set aside. Let the okonomiyaki cookoff begin.

The most successful technique involved adding 1/4 cup batter to a hot, oiled skillet and smooshing it out flat with a large spoon. Flatter pancakes cooked more evenly and were much easier to flip than those that held mounds of filling. 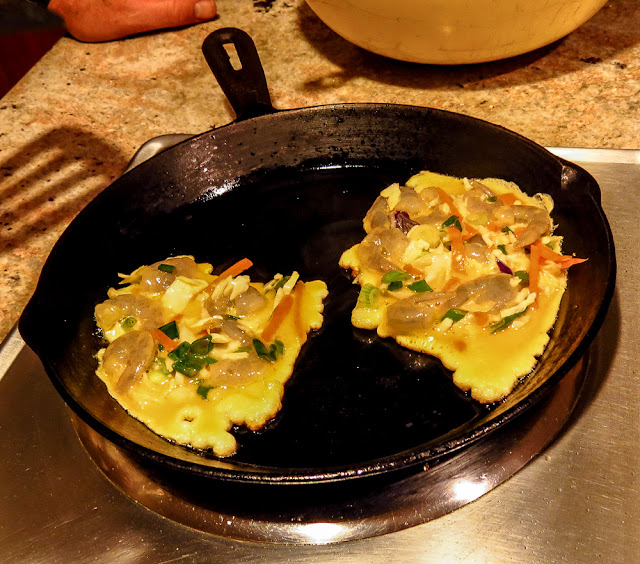 The smooth surface of the cast iron pan accounted for easy release and flipping, while the small ridges on the bottom of a Circulon skillet resisted releasing the pancakes. Messy, but doable. 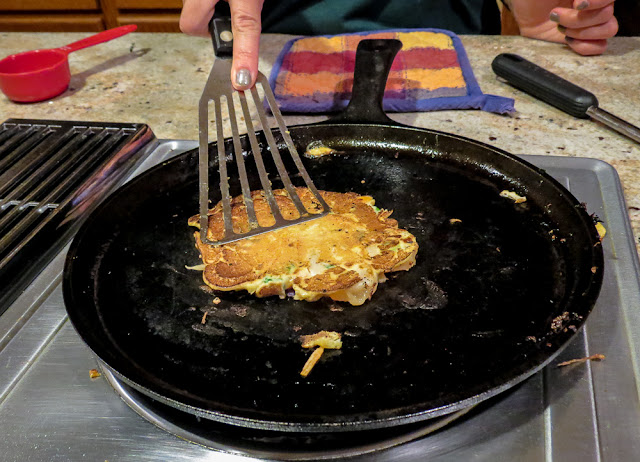 We ended up with plump pancakes rather than flat, crispy edged crepes. No matter. The pancakes were delicious; tangy, crunchy, eggy little disks packed through with toothsome cabbage and shrimp. Tasty enough on their own, their flavor really popped with the addition of the dipping sauce. Hilary added more sriracha, Ron reached for the sweet Thai chili sauce, and I claimed more dipping sauce for myself. Win, win.

The iPhone camera roll still awaits organization, but now I'm eagerly looking for the next food inspiration as I begin to sort through the photos. 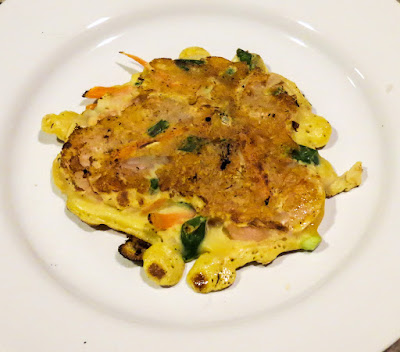 Cabbage and Shrimp Pancakes - aka Okonomiyaki
based on a recipe at Food52.com
Yield: 12 medium pancakes

Dipping Sauce
1/2 cup lite Best Foods mayonnaise
2 tablespoons lime Ponzu sauce
1 tablespoon Sriracha, adjust more or less to your own taste (we recommend more)
Note: use as a dipping sauce or add to a squirt bottle and squeeze over the pancakes.