...with Fruits and Nuts 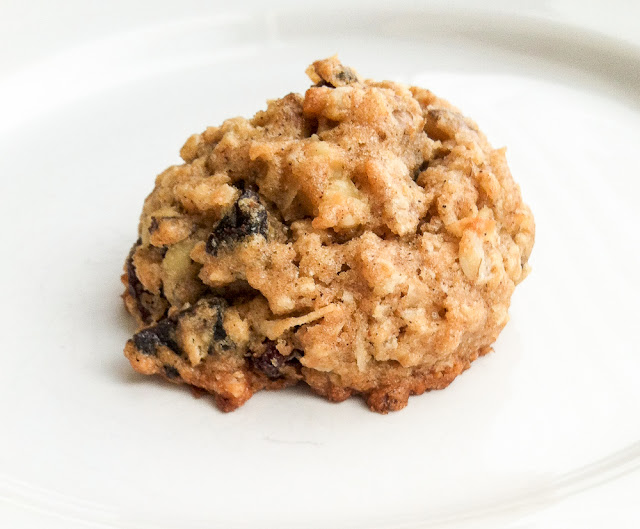 "Baking is a science." I've read that before, an authoritative declaration that implies recipes are exact formulas not to be messed with. Maybe so, but I like to tinker with recipes. It's fun and occasionally necessary to match what's available in the  pantry. Sometimes a big "Aha!" moment results, and occasionally we deal with disappointment or even a kitchen disaster. This week's oatmeal cookies were a good example of a happy, tasty and unplanned accident as I really messed around with the original recipe.

I didn't want to deal with dividing up a soft, squishy cube of butter so I tossed the whole stick into the mixing bowl. Right, more fat called for more flour and why not toss in some whole wheat flour and a smidge of ground flax just 'cuz it might be healthier. Done; so far, so good I thought. Then the "accident" part came along. Cheers from the TV football game diverted my attention, ending any hope of thoughtful recipe tinkering. While watching the playoff action on TV I grabbed dark brown sugar instead of light and forgot to adjust the quantities of sugar, added baking powder instead of baking soda, increased the quantity of rolled oats and coconut, substituted dried prune bits for chocolate chips that I couldn't find, added almond extract and vanilla extract... and hoped for the best.

The result to radically changing the ingredients and ratios? Beautifully soft, moist oatmeal cookie puffs, an amazing contrast to the usual flat and crisp cookies of the original recipe. Something(s) in all of this recipe tinkering impacted the appearance and texture of these cookies. I've considered the question of flat vs. puffy cookies before (link), but have not explored it systematically. I still don't know how to account for the change, don't really care. I do know I will make these puffy oatmeal cookies again; they disappear so quickly from the cookie jar. 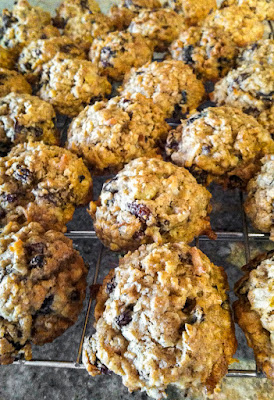