...recommended for breakfast, as appetizers, or as anytime treats! 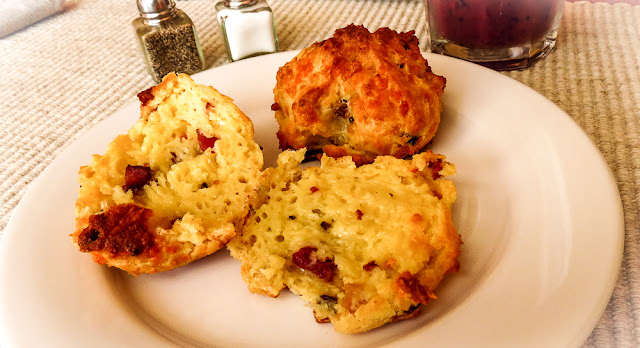 Pastry puffs and I have a long and complicated history. Here's the short version of our troubled relationship:
1) Sweet cream puffs (choux) are sometimes unreliable, often failing to puff, instead producing flat wafers.
2) Savory cheese puffs (gougeres) perform more consistently, but an occasional batch will still go rogue.
3) Sweet and savory puffs only fail when success is really, really important, like a company event. Always have a biscuit backup plan, just in case.


That said, this week's gougeres, a potential disaster-in-the-making, ultimately rose to the challenge and saved the day and my reputation as a cook. A guest texted a message announcing major traffic problems and her late arrival for lunch. No problem, I delayed mixing a small batch of cheese puffs until the last minute. Fiddling around in the kitchen, I created a new salad dressing, set the table, eventually grew totally distracted and it all went downhill from there. In a rush to get the puffs mixed as she arrived, I somehow doubled the liquids but didn't notice the mistake until after adding the butter and flour. No matter how much I beat in the flour, the dough refused to come together into a ball. Oops! Reread the recipe, check out the measuring cup, roll eyes and smack self on the head.

Instead of starting over I pressed on and hoped for the best. At worst there would be one more interesting kitchen story. Sigh!


Whew! luck prevailed. The texture was spot on; a crunchy exterior covered light, tender insides and most puffs displayed hollow centers. These were the best gougeres ever. Go figure! Doubling the recipe worked, even with such an unorthodox method. Slone left with a package of puffs for her drive south and we enjoyed the remaining treats as breakfast sandwiches over the next several days. 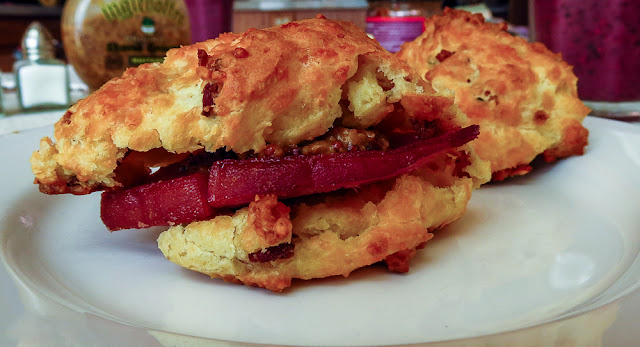 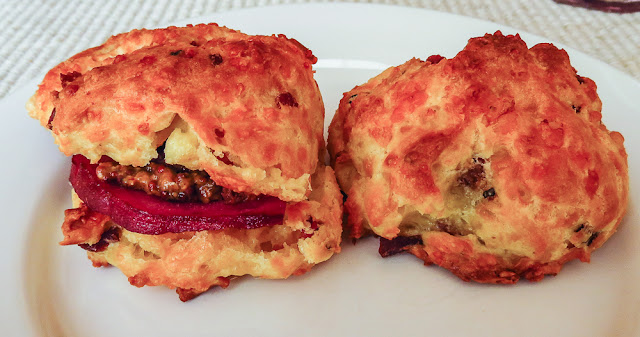 Directions:
Preheat the oven to 400 F.

Use a small, heavy saucepan and combine milk, water, butter and salt. Bring the mix to a boil over high heat. Reduce the heat to moderate; add the flour all at once and beat the mixture with a sturdy wooden spoon until it leaves the side of the pan and forms a ball. Stir for 2-3 minutes longer to dry out the dough a bit.

Remove the dough from the heat and transfer to a bowl; beat for another minute or two until the dough cools down a bit and stops steaming. Use a heavy spatula or whisk and beat in the eggs, 1 at a time, whisking well after each addition.  Stir in the cheese, bacon and pepper.

Drop or scoop the batter in 8 mounds on a prepared baking sheet or silpat. Bake puffs in upper third of a preheated 400 oven for 20-25 minutes, or until crisp and a rich golden brown.

The puffs may be kept overnight in an airtight container. Reheat briefly in the oven, if desired, but note the puffs will lose crispness if reheated in a microwave.