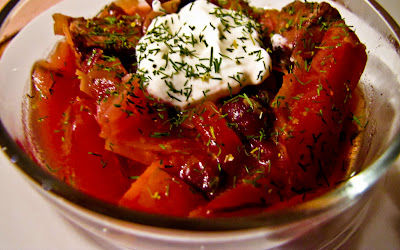 Borscht - how can a word have so many consonants and just one vowel? Go ahead, say it, "Borscht". Doesn't it resonate with Central and Eastern European food flavors? For me it calls up two competing soup memories. Is borscht a cool and silky strained beet broth, presented in a clear-glass cup to celebrate its vibrant, neon-red color. Or is it the surprisingly pink peasant soup, meaty and full of chunks of vegetables, potatoes and assertive spices? Borscht can be both of these, and more.

I don’t remember eating borscht as a child. It really became a dine-out treat for me during our early-married years, after we discovered BarneyBagel and Susie CreamCheese, a tiny restaurant on one of Seattle’s downtown piers. We lingered over those steaming bowls of soup, warming up after wet and windy walks along Alaskan Way/Elliot Ave. I can still picture the trifecta of budget-friendly restaurants in that waterfront neighborhood - Barney Bagel, Shakey’s Pizza and The Old Spaghetti Factory. In visit after visit I pestered the Barney cook to share his borscht recipe. He finally granted me a quick peek inside his binder of secrets, but whisked it away when I began to take notes. There began my ongoing search for a Best-of-Borscht recipe. The search continues today, decades later.

During a past boat trip we found borscht featured on the menu of the BayView Restaurant in Sitka, Alaska. The harbor view from that second floor eatery was captivating, but it was the borscht that brought us back repeatedly. And then the BayView sold, the menu changed, the soup disappeared... drat! Sitka has a strong Russian heritage; wouldn’t you think borscht would be easy to find in local restaurants? Not so. But I digress.

My current borscht recipe has a varied history, leaning heavily on The Good Cook: Soups by Time Life (1979), and The Best Recipe: Soups and Stews by Cook’s Illustrated (2001). More recently Seattle chef Greg Atkinson published a more modern version of borscht (here and here). We differ in some ingredients and procedures, but his text is interesting and his directions clear.

I don't mind spending two days to prepare the soup, but there are shortcuts that can simplify the process.
After all these years, borscht development is still a work in progress. 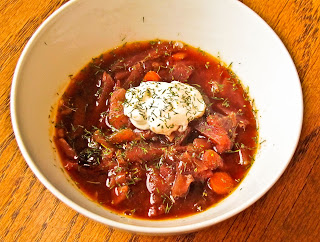 Beet and Beef Borscht
from The Best Recipe: Soups and Stews


*Note: if you prefer a thicker broth, use cornstarch or flour to thicken.

Email ThisBlogThis!Share to TwitterShare to FacebookShare to Pinterest
Labels: soup