Note: this should really be dated April something, but the post just sat around as a draft for an entire month! Now it's May and we're back aboard, the weather is wet and blustery with whipped-up water inside the marina. That's reason enough to warrant a posole party, even though it's past Cinco de Mayo. I may be back on the boat but I still can't find my usual recipe, so here's the Ad-Lib Posole post and recipe anyway. I'll have to rely on this version for tomorrow's batch. 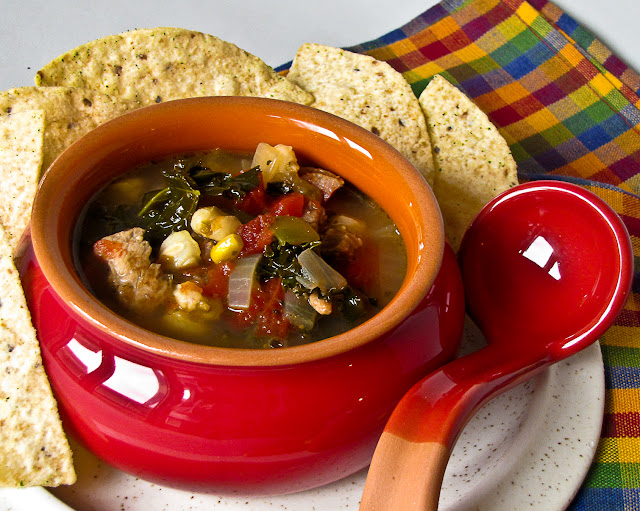 Photo: A warming bowl of  Posole, just waiting for toppings


"March went out like a lion, a'whippin up the water in the bay..." Those Rogers and Hammerstein lyrics ran through my mind repeatedly as I watched the surf build up on the lake. The music from Carousel is infectious that way, once those lilting melodies take hold, they stay with you all day. So I smiled and sang my way through the morning, ignoring the rainy windstorm raging outside the kitchen. Except when I tossed on a rain jacket and ventured outside to check on progress in the yard.


RL worked with a 3-man crew to attack some major tree pruning, shrub trimming, planter bed cleaning, power washing, etc. Our yard is small, but during Spring cleanup it seems to grow acres larger. That's especially annoying since we're focused on leaving town and moving aboard the boat. While the fellows dealt with the landscape and the weather, I ad-libbed a large pot of posole. Why ad-libbed you ask? Because my usual recipe was left behind, stored somewhere on the boat, never transcribed onto the computer. I might prefer this new version anyway. It was certainly a hit on a chilly yardwork day.


Posole is a classic dish, enjoyed for centuries in Mexico and the American southwest. It's a thick soup that's usually made with pork, hominy, garlic, onion, chili peppers, cilantro, and broth. Okay, I covered those bases with my freeform recipe. Green Posole and Red Posole are traditional holiday dishes in New Mexico, but location doesn't matter - posole makes any meal taste like a celebration. Ole!