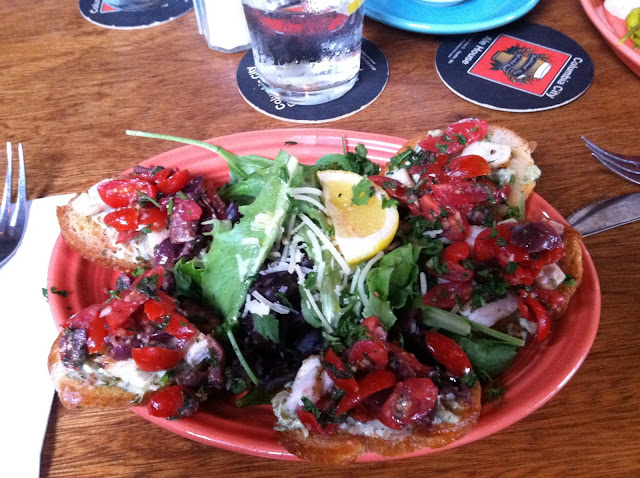 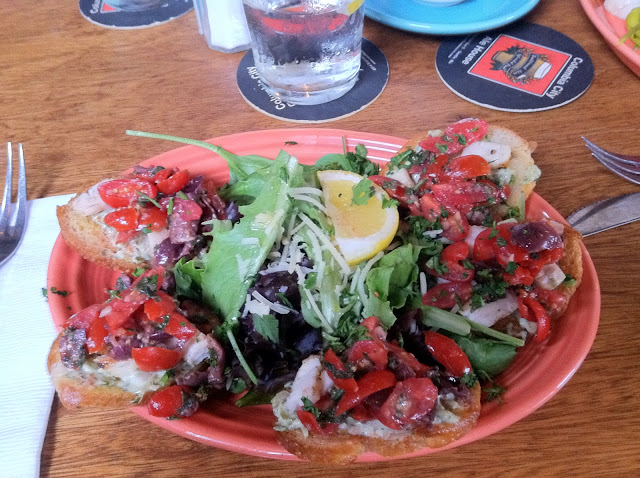 I shudder to recall my first iPhone photo (link), that dark, grainy, mushy-focused image. This week we met friends at the same restaurant and swordfish bruschetta was still on the menu. There was my chance to reshoot the photo in improved conditions and to rethink the transfer process.
We arrived early and chose a table near the restaurant's front window. Poor lighting would not be an excuse for another drab image. I cautioned myself to shoot a few pictures before I put fork to plate or became totally engrossed in conversation. After all, we four had interesting stories to share.
Time after time, the HDR setting clicked off two quick shots of the same photo (as shown above) at two different exposures. They looked bright on the iPhone screen, much better than that first shot of last week. So far, so good.
The next step was to connect the phone to the computer. Easy enough to plug in the cord, but the iPhone didn't show up listed as a device on the Mac's Finder window. Why did I expect that it would? I'm accustomed to the camera and external drives showing up that way. It seemed that would be logical, but it didn't happen that way. Eventually I thought to open the application iPhoto. After that it was mindlessly easy to import the photos, but challenging to locate the file where they had been stored. Okay, one step at a time.
I found the photos and was able to move them to another location where other software could access them. The picture quality was greatly improved with this method compared to the previous iPhone-email transfer process. Better lighting and direct upload made a huge difference... I wonder which one had greater impact. TBD
This is a work in progress, until I find the magic shortcut that someone has posted online somewhere.  For now, I'm encouraged to keep shooting with my iPhone. I'll try out a few apps and use it when a larger camera would get in the way.

Email ThisBlogThis!Share to TwitterShare to FacebookShare to Pinterest
Labels: uncategorized