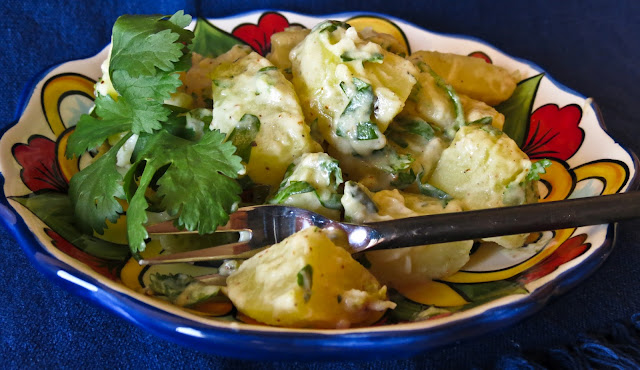 Give me one week of solid sunshine and I'm ready to launch into summer. It's barely February, not even close to Spring, yet I found myself daydreaming about summer fun, summer weather and summer food with strong, bright flavors. It helped too that the kitchen was overstocked with the fresh green colors of cilantro, tomatillos and Poblano peppers. So I roasted those green veggies and took a mental road trip into summer adventures.


The aroma of roasting peppers filled the house, reminding me of a tempting recipe I had bookmarked months earlier. Bookmarked, and then resisted. Last June (link) I stated a preference for vinaigrette dressing on potato salad. Actually I ranted on and on, dismissing potato salads with a mayonnaise base as too goopy and weighty. Then HomesickTexan featured a Poblano Chorizo Potato Salad post in July and I was tempted. Poblanos, chorizo, potatoes - who could resist? But it called for mayonnaise, so I resisted. Resisted until this week, when those lovely just-roasted peppers demanded star billing. So I worked on my version of that tempting bookmarked recipe.


I roasted a dozen tomatillos and five peppers, knowing they could be used in several familiar dishes. While the online recipe called for two Poblanos, I only used half of one large pepper. It was hot enough to make it's presence known! You know the feeling, when your lips tingle a bit but you don't quite break into a sweat or cry. 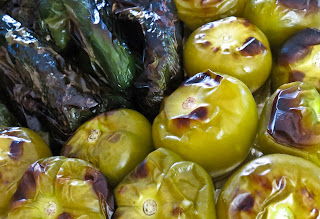 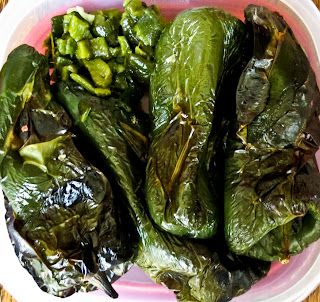 Basic kitchen ingredients combined to make a tangy dressing, not at all goopy or weighty. Cumin can be overpowering in scent and taste, but it played nicely in this dressing. The same can be said for the garlic. 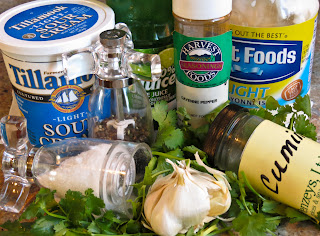 That vibrant green color hints at the flavor punch a Poblano can pack. Mmmmm, love those peppers! 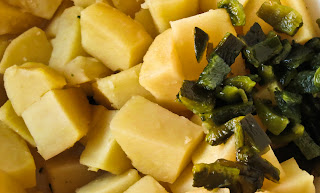 RL raved over this recipe, declared it his new favorite and promptly ate two helpings. That's translates to two thumbs up at our house. So now we have another "favorite" version of a sunny, savory potato salad. Every cook needs more than one great potato salad recipe in their repertoire, right? What's yours? 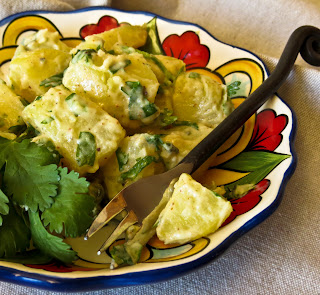 Poblano Potato Salad
adapted from a recipe by Lisa Fain, the HomesickTexan