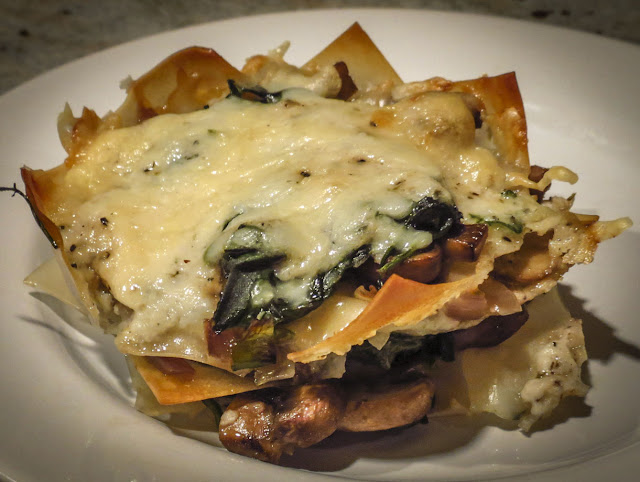 It's reveal day for Secret Recipe Club, Group B, and I can finally share a recipe from my assigned blog, BizzyBakes. Chaya's posts were peppered with nuggets of humor and presented so many tempting choices as I browsed through the Bizzy Bakes archives. Then her Muffins and Sweet and Savory links sent me off in still other directions. Eventually my recipe selection narrowed down to a choice between Little Lasagna or Pasta and Mushrooms. Shazam, inspiration flash! just combine the two recipes, tweaking them a bit to fit our tastes and the ingredients  available on the boat. I think Chaya's adventurous blog character, Wonton Warrior, would approve. Visit Chaya's blog to see the original recipes.

Version One, my practice round, featured layers of cooked button mushrooms, chopped white onions, shredded kale, a pinch of sage and a handful of mozzarella cheese, stacked in between squares of wonton wrappers. The resulting lasagna cupcakes were tasty enough, but more ordinary than special. RL complained about the crispy corners that made the wonton a dangerous dish to eat.

Version Two really took shape with a big bag of dried chanterelle mushrooms, beauties that begged to be part of something wonderful. Those gems were a gift from a generous friend who forest-picked and dehydrated them during Fall 2012 (thanks again, Jean!). Rehydrated in a combination of beef broth and chicken broth with a touch of thyme and mint, then cooked in a bit of butter until the liquids evaporated, those mushrooms were swoon-worthy delicious! It was hard to put down the tasting spoon and save enough filling for the official dish.

The process: Saute onions in a tablespoon each of butter and oil until softened all caramelized and golden, but not crispy brown. Remove and set aside. 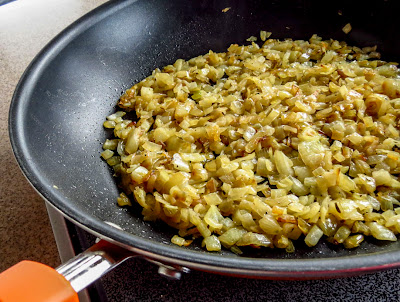 Sort through the dried mushrooms, remove tough stems or ugly bits as needed, and chop into large pieces. 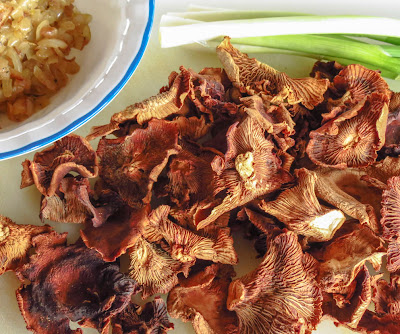 Bring equal portions of beef broth and chicken broth to a simmer; add some white pepper, dried thyme and mint and reduce heat as necessary to hold at barely-bubbling status. 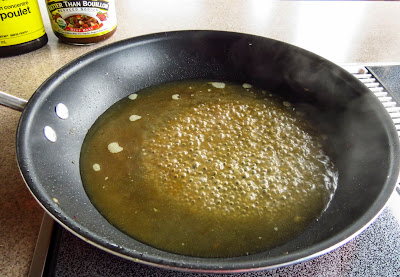 Place the dried mushrooms to the pan and simmer until softened; add butter to the pan and cook until the liquids have evaporated and the 'shrooms are golden and tasty. Remove and set aside. 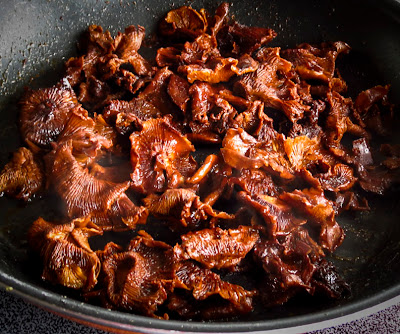 Use the same pan and cook pancetta or bacon until browned, done but not too crispy. Remove and set aside to drain on paper towels. 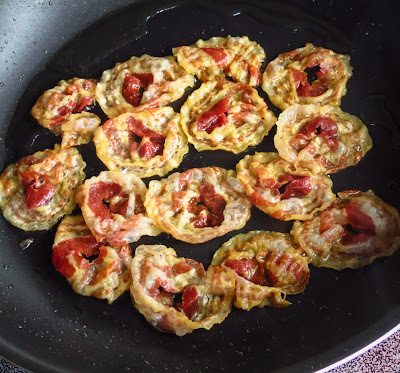 Assemble your ingredients so the wonton lasagna come together quickly. I recommend using round wontons to save time and avoid those dangerous sharp, crispy edges! Parmesan and feta cheese combined for a pleasant, mild flavor, but mozzarella or any soft white cheese would be a good choice. Chopped green onions added color and one more oniony note. 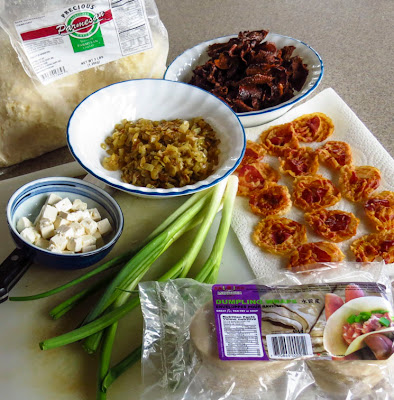 Butter, oil or spray each baking cup or muffin tin. Stack layers of ingredients beginning and ending with a wonton lightly sprinkled with cheese: wonton, cheese, onions, 'shrooms, pancetta, other cheese, green onion bits. Repeat this layering until you run out of stackable space or filling.

Bake at 375 F for about 20 minutes, until the cheese melts and each little lasagna is warmed through with slightly browned edges. Rest on a baking rack for several minutes to allow the lasagna to firm up before removing from baking cups. 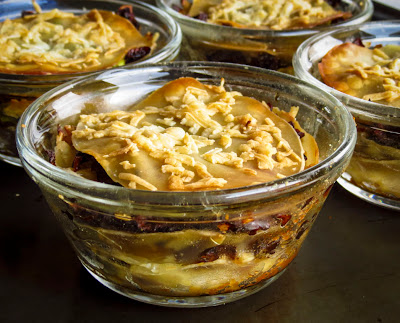 Photo below: Lasagna served baked-side-up as a first course or appetizer. 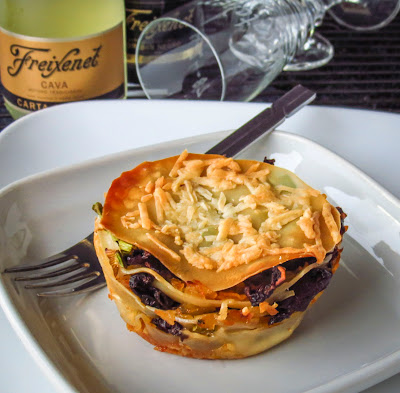 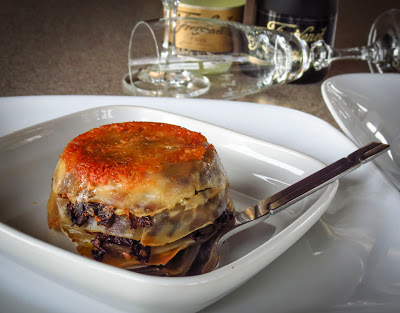 Results: I love the wonton lasagna concept, but the details need work. Next time I might combine the two ingredient lists, still using chanterelles rehydrated in broth but adding some sherry or vermouth to the cooking liquid for a more complex flavor. Kale added texture and color, so its a keeper. The pancetta rounds were attractive but not fork-friendly, so they need to be diced or replaced with bacon or some crumbled sausage. Alternatively the dish could be meatless and still pop with flavor. One of the cheese choices should be readily meltable to hold the stack together, but not so runny that it pools in the bottom.

Mini Wonton Lasagnas invite recipe tweaking. Substitute your favorite ingredients or play with new ones; there's little risk involved since you can begin with a small sample of one or two cups. Serve them as a first course, an unusual alternative to 'shrooms in a crepe purse, or plate one or two with a green salad for a lunch entree or light supper.

Thank you, Chaya and Wonton Warrior, for this recipe inspiration.