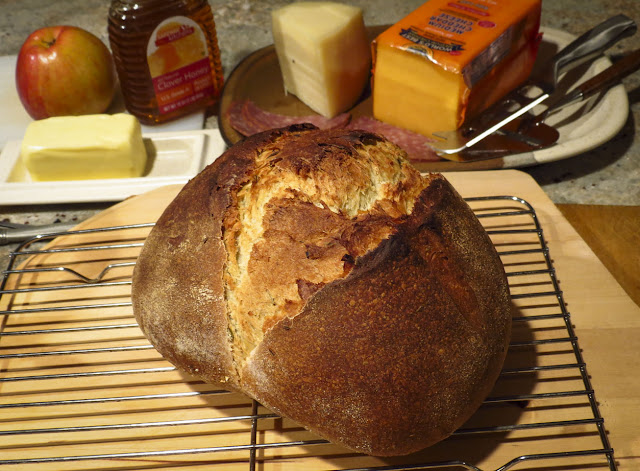 Today was Bread Day, a day to try a new recipe and get serious about sourdough again. My starter had been sulking lately, putting out a few puny bubbles after its weekly feeding instead of expanding enthusiastically. So I gave it a pep talk, fed it three and four times a day for several days, and brought it out of its slump. A well-fed starter is a happy, active starter, and I've been altogether too casual about feeding mine recently. Hey, I've been quite casual about bread making in general for years without any problems. If "Cooking is an art and Baking is a science", then either baking bread is an exception, or I have just been very lucky.

Today I decided to give precision a try. I read through the entire sourdough section in the hefty King Arthur Baking Cookbook, paying careful attention to various cautions about weighing vs. measuring, folding vs. kneading, steamy vs. dry oven baking. Weighing the flour and sourdough starter gave me an excuse to break out some underused kitchen tools. 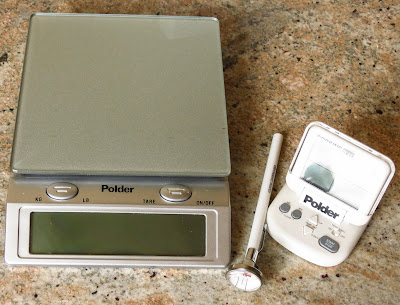 The new recipe promised to yield a hefty 3-pound boule, or two 1.5-pound loaves. That's a lot of bread for two people. Cautiously opting for a half recipe to see if we liked this sourdough version, I followed the recipe faithfully, step by step, right up to the final addition of salt and rosemary. The rosemary whispered to me, "send in some lemon zest!", so I did.

The dough mass was a bit sticky, but not excessively so. It was easy to knead without adding any extra flour, not always the case in my experience. I don't own any fancy proofing bowls or baskets, but a lightly-floured tea towel and medium size round-bottomed mixing bowl created a fine substitute. 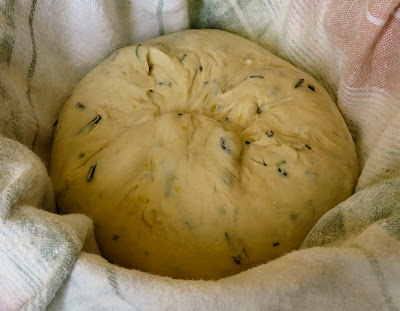 The scoring of the top looked fine before baking, but turned out to vary in depth and distort the finished baked crust. Okay, no awards for appearance. 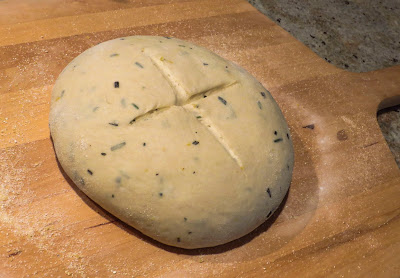 The recommended times for resting/fermenting/rising worked out as written. My oven may run a little hot, because the bread was finished in 35 minutes rather than the predicted 40. Checking the temperature with a thermometer took any guess work out of the process. It finished at 200F exactly with a browned crust and fully-baked interior. 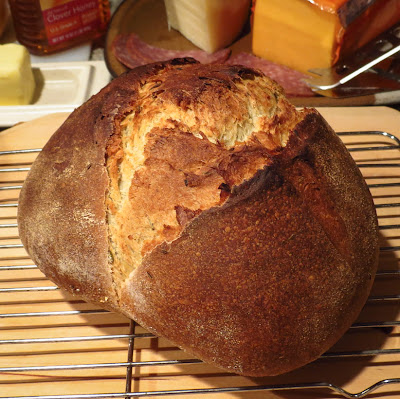 The crust was firm with a crackly flake and crunchy bite. The interior was soft with a light, open crumb. A pronounced rosemary flavor was noticeable, yet pleasant while the lemon zest faded away, far into the background, barely discernible. That lack of lemon tang disappointed the cook, but no one else knew of its presence or missed the flavor. 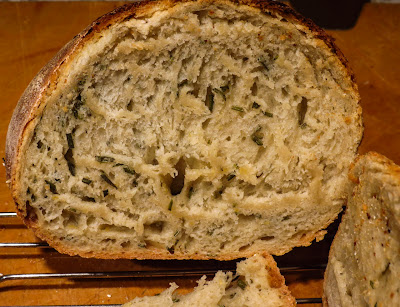 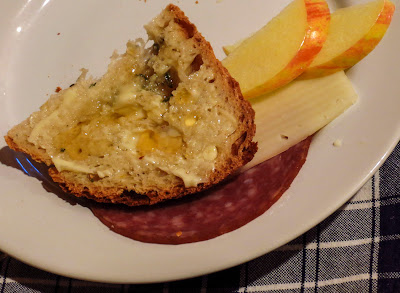 Put the flour in a large mixing bowl. Add the water and olive oil to the starter and stir the mix into the flour. Mix by hand for 2 minutes, until the flour in completely incorporated but the dough is not yet smooth. Gather the dough into a ball, cover loosely with a cloth, and let rest for 30 minutes.

Add the salt and knead dough until it becomes smooth and only slightly tacky. (This took about 7 minutes; I wasn't very energetic.) Sprinkle the rosemary and lemon zest on top and gently knead to evenly distribute these additions throughout the dough ball. Avoid adding any additional flour; the dough should be a bit tacky and soft, not firm. Use a thermometer and check the dough's temperature; it should be roughtly 78F to 80F. (What do you do if it isn't in that range? knead it some more, perhaps?) Return the dough to the bowl, cover lightly with a tea towel and let it rest and ferment for 2 hours. After the first hour, fold it once (all 4 sides folded and overlapped,envelope-style).

Pick up the dough and roll the edges under, forming a loose ball; place the bottom (the seam-side) up on a lightly-floured surface. Cover loosely with a tea towel and let it rest for 20 minutes.

Form the dough into a tight, round boule; place seam-side up in a well-floured proofing basket for 2 hours. (I used a floured linen tea towel inside a mixing bowl.)

One hour before baking, preheat the oven and baking stone to 450F. Place a cast iron pan on the shelf below the baking stone. When ready to bake, turn the loaf onto parchment paper set on a baker's peel, or a semolina-dusted peel, and score with a razor or sharp knife. Slide onto the baking stone and pour water into the cast iron pan to fill the oven with steam. Bake at 450F for about 40 minutes, opening the oven door to remove the cast iron pan and let out the steam after 20 minutes. (I baked 20 min, removed the pan of water and baked 15 minutes more: the bread was done!) When the bread is ready, the crust will be richly colored. Use an insta-read thermometer to check the temperature of the loaf: he internal temperature should be about 200F.

Cool on a rack before slicing with a serrated knife.. (I couldn't wait and hacked off a few slices while the loaf was still quite warm. They were ragged and squishy, but tasted divine with a slather of salted butter and a drizzle of honey.)

Note: This recipe was baked for and submitted to #TwelveLoaves February 2013. The theme this month was a fun and easy one: share whatever bread you’d like. Now take a few minutes and check out some of the other breads baked by this group in February. (link)