- a savory SouthWest version of the classic. 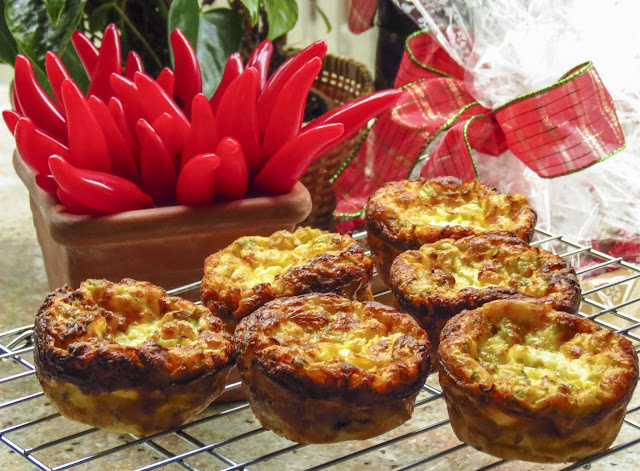 Sourdough Surprises selected popovers as the December 2013 baking challenge. Sourdough and Popovers? This was a surprising pairing. I hadn't baked or even thought about popovers in ages, and certainly never with sourdough starter in the ingredient mix. This would be "interesting".

A King Arthur Flour recipe was referenced but my inspiration came from two other sources; an online post here followed by a recipe in my local food co-op newsletter. Both offered a different take on savory popovers packed full of southwest flavors. Oh yes, these recipes called my name. It is impossible to resist bacon, cheese and chiles in anything. 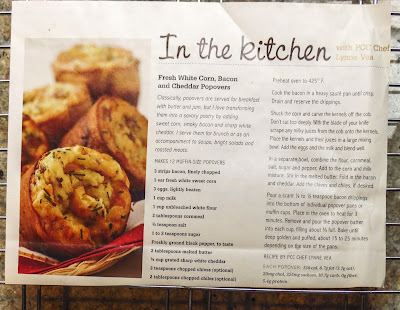 The results were surprising, definitely tasty but not quite what I had expected. These were not the everyday popovers I had attempted before, those towering, airy wonders that totally collapsed as they exited the oven. No, this sourdough variation delivered less puff and more egg, resembling a light, savory custardlike pudding encased in a thin-shelled pastry.

I sampled one bite of the outer crust and then nibbled the soft, flavor-packed center. Forget the fork, I pulled the remaining crust apart and ate it with my fingers... every crumb... piece by piece. Mmmmm, I loved that delicate, crispy edge. Recovering my manners I returned to the fork to finish the moist center of that first popover, and then ate a second one. Even RL, not usually an egg enthusiast, enjoyed two popovers. 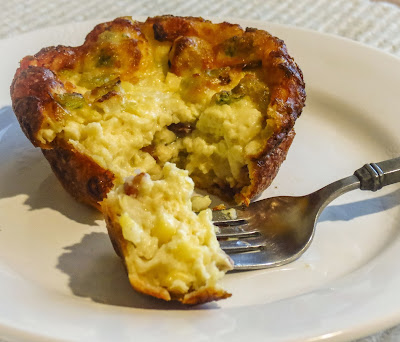 Lighter than a quiche or frittata, but more dense than a traditional popover, this Loaded SW Popover was a new crossover wonder. Thanks for the popover challenge, Sourdough Surprises. 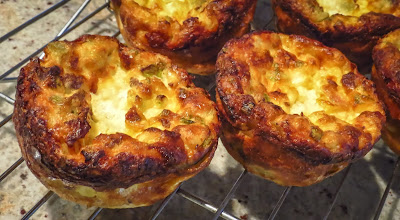 Move a baking shelf to the bottom third of the oven. Preheat the oven to 425 F.

Cook the bacon in a heavy skillet until crisp. Remove from the pan, drain and set aside, saving the drippings. (It's easiest to fry up whole or half slices, then crumble after cooking and cooling.)

Mix the dry ingredients (flour, cornmeal, salt, sugar and pepper) in a small bowl. Set aside. (I sifted them through a sieve, an optional exercise.)

Add the dry mixture to the wet mixture and stir to combine. Add the melted butter and mix. Fold in (fold in, not whisk in or beat in) the bacon, cheddar, chives and floured chiles.

Use 2 muffin tins and plan to fill alternate cups with batter. Place 1/4 to 1/2 teaspoon bacon drippings in the bottom of alternate muffin cups. Place in the preheated oven to warm for 3 minutes (any longer and you'll have smoke alarm issues). Remove and quickly pour the popover batter over the heated bacon drippings in those cups, filling about 3/4 full. (Optional suggestion found online: Pour a little hot water, less than an inch, into each empty muffin cup to avoid warping the pan.) Bake until puffed and a dark golden color, approximately 15-20 minutes for regular size and 20-30 minutes for Texas size.

Remove from the oven and place on a baking rack to cool for a minute or two. Run a butter knife around the edge of each popover to loosen, tilt in muffin cup or remove to a backing rack for a few minutes to set up a bit. Serve when still quite warm.

Cook's Note: Next time I will try using a blender, whizzing up half of the onions and chiles with the wet ingredients and stirring in the rest by hand.