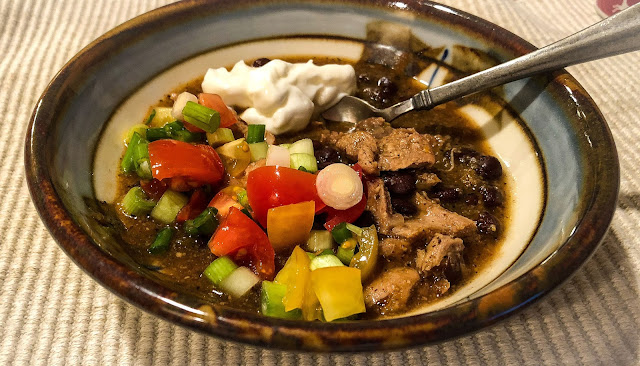 My pressure cooker is seriously underutilized, a handy, timesaving device that stores out of sight and evidently out of mind. It proved its usefulness again recently when I wanted a quick, tasty bowl of chili in under an hour, not several hours from now. Too many of my chili recipes call for browning the meat, then cooking slowly for 2 to 3 hours on the stovetop (or 6 to 8 hours in a slow cooker). Not so this pressure cooker version; after browning the meat, it took just 20 minutes under high pressure to develop both taste and texture.

RL noted the chili heat needed taming on day one, and unusual response from him, but the bite had mellowed significantly by day two. It took a few tablespoons of sour cream to tame the chile bite for me on both days, but I am an admitted chili heat wimp. 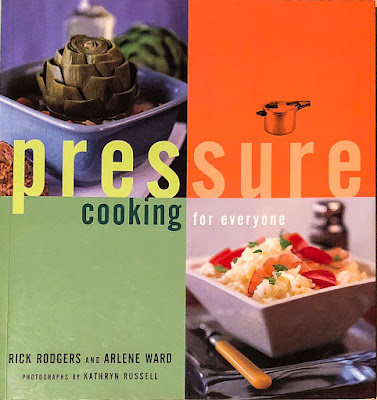 A recipe for Abilene Beef and Bean Chili from a Rick Rodgers cookbook, Pressure Cooking for Everyone, provided guidance as I changed up the ingredients. I substituted pork shoulder for the specified beef bottom round, used 2 Hatch chiles instead of 1 jalapeno and a single tablespoon of Penzeys' awesome Chili 3000 blend rather than 2 tablespoons of anyone else's chili powder, then added tomatillos and fresh orange quarters for a hint more flavor.

The results? Mmmm, that was some tasty peppy chili. The Rogers cookbook is noted for requiring multiple steps, pre-browning or adding ingredients requiring additional after-pressure cooking, but if this chili is any guide then a few extra steps are worth it. Now it's time to try a few more quick pressure cooker recipes. 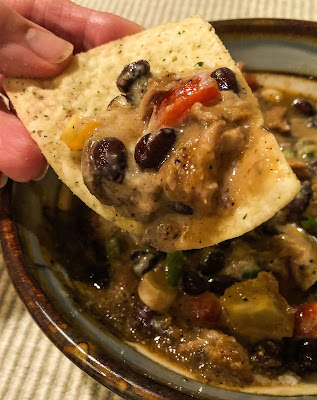 Adapted from Pressure Cooking for Everyone by Rick Rodgers

Heat 1 tablespoon of the oil over medium-high heat and brown the pork chunks in several batches. Don’t crowd the meat or it will stew instead of searing. Remove to a plate and set aside. Add more oil as needed for subsequent batches.

Discard the excess fat, but leave the browned bits on the bottom of the pan. Heat the remaining tablespoon oil and add the onion, peppers, tomatillos, chiles, and garlic. Cook to soften, stirring often.

Return the pork to the pot along with any juices that accumulated on the plate. Sprinkle with the spices and salt; stir and toss to mix well. Add in the stock; stir and scrape up the browned bits from the bottom. Add the oranges.

Cover, lock the lid in place and bring to high pressure over high heat. Adjust the heat as needed to maintain high pressure and cook for 20 minutes (I used a flame tamer under the pot on my electric element). Do a quick-release, open the lid and let stand for 5 minutes. Remove and discard the orange halves; skim excess fat.

Note: I often use some bone-in pieces and pull the meat out at this point to debone, defat and shred.

Use a small bowl and make a masa slurry, whisking the masa into a generous cup of the cooking liquid. Stir this slurry into the pot and add the beans. Cook over medium heat until the juices thicken a bit; stir frequently to prevent scorching the bottom of the pot. Return the meat chunks or shreds to the cooker; taste and adjust seasonings.

Serve in bowls with optional toppings alongside, or use to fill tortillas.