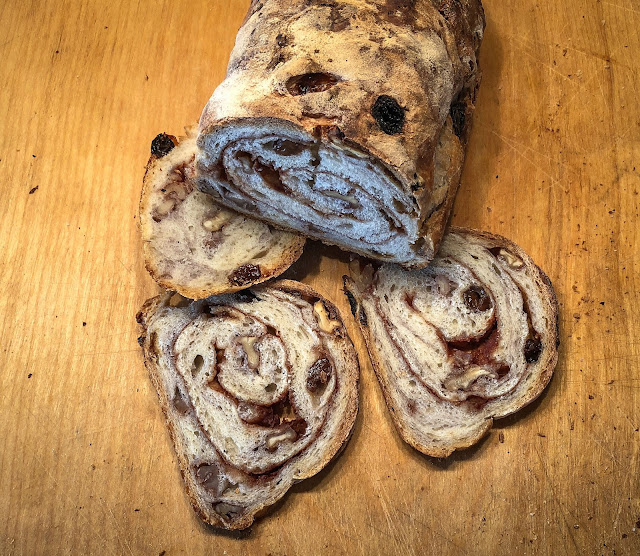 This is not your old school, sweet and soft-textured raisin bread. As a kid I loved an occasional raisin bread treat, a toasted thin slice swirled with barely a hint of sweet cinnamon and raisins. That loaf was fluffy, a close cousin to Wonder bread in taste and texture, and rare enough in our household to be a special treat. This sourdough version isn't even remotely relately to that insipid bread of my childhood. Ahhhh, this raisin bread from Emilie Raffa's book Artisan Sourdough Made Simple offers texture and crunch along with a distinct cinnamon flavor in every bite.

Raisin bread is not a new idea,


Wikipedia notes "there have been published recipes for bread with raisins since 1671. Since the 15th century, breads made with raisins were made in Europe. In Germany stollen was a Christmas bread. Kulich was an Easter bread made in Russia and panettone was made in Italy. The earliest citation for "raisin bread" in the Oxford English Dictionary is dated to an 1845 article in Blackwood's Edinburgh Magazine."

Raffa's sourdough version changed my view of what raisin bread could be. I took a few liberties with her recipe on my first attempt and still ended up with good results. We are already anticipating the next loaves for breakfast slices and snacks.

Results from the first bake:

Crust: I'll admit that first crunchy bite was a bit of a shock when my food memory anticipated the squishy-soft bread of childhood. RL and I quickly adjusted our expectations and reveled in this altogether new slice. Yes, the crust was crackling hard on day one, but thin enough so no tooth was endangered. After overnighting in a plastic bag, the crust softened somewhat, but remained fairly firm on day two. There was no bread left for further comment, we ate it all quite happily.

Crumb: the interior was soft but not sandwich-bread soft. My first loaves were not as airy as those pictured in Raffa's photo; an issue for this cook to work on. Now that my sourdough Old Faithful is back in active form any missteps are definitely mine.

Filling: the ratio of cinnamon mix, raisins and walnuts was ample, providing a treat to savor in each bite.

Taste: cool or toasted and spread with just a slather of butter, the bread seemed undersalted. A sprinkle of sea salt on top made a difference. Spread with cream cheese or berry preserves, salt was not an issue. 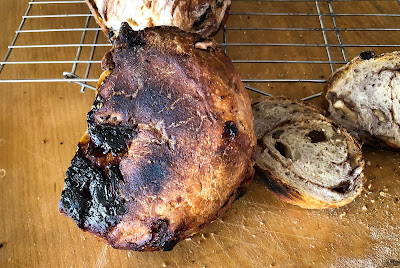 With only two of us to indulge in a freshly baked loaf I'll put off a second round of baking for another week or two, but there will be more sourdough cinnamon raisin bread with walnuts in my kitchen soon. Sooner if I decide to share more loaves - anyone nearby want to share? 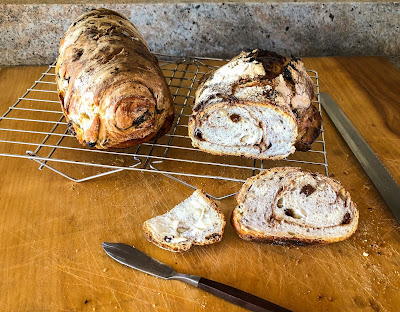 Day 1:
Whisk the starter and water together in a large bowl. Add the flour and salt; stir to incorporate. Cover with plastic wrap or a damp tea towel and rest for an hour. While the dough is resting soak the raisins and walnuts in warm water. Note: drain well before using!

Add drained raisins and nuts to the rested dough; knead briefly & gently to incorporate. Add a sprinkle or two of flour to adjust the consistency, as needed. Note: avoid adding too much flour.

Cover the bowl with plastic wrap or a damp tea towel and let rise overnight until doubled in size (or 8 to 10 hours).

Day 2:
Place the dough on a lightly floured board & let rest for 15 minutes or more. Line proofing vessels with flour-dusted towels or sprayed parchment paper. Mix the sugar and cinnamon in a small bowl & set aside.

Flour your hands and stretch half of the dough into a long rectangle. Brush the surface with water & sprinkle the sugar/cinnamon mix evenly over the top. Leave a clean border around the rim for a better seal after rolling. Begin with a short side and roll the dough into a log. Pinch the ends to seal. Move to the proofing vessel with seam side up. Repeat with the remaining dough.

Cover the dough logs and let them rest and rise again, 30 to 60 minutes. They will not double in size. Preheat the oven to 425 while the dough rests. Cut parchment paper to generously fit the baking pots if you used proofing baskets. Put the paper over the baskets, invert and remove baskets. Otherwise gently roll your loaves over, seam side down on their parchment bases. Gently poke any exposed nuts and raisins back under the surface to prevent scorching.

Dust the surface with flour; make 2 or 3 shallow diagonal slashes (shallow to avoid exposing the filling). Use the paper & lift the loaves into their baking pots.

Bake covered 20 minutes on the center oven rack. Remove lid and bake uncovered for an additional 30 to 40 minutes (aim for 190 to 200 degrees F at the center). Remove to a wire baking rack and cool for at least one hour before slicing.