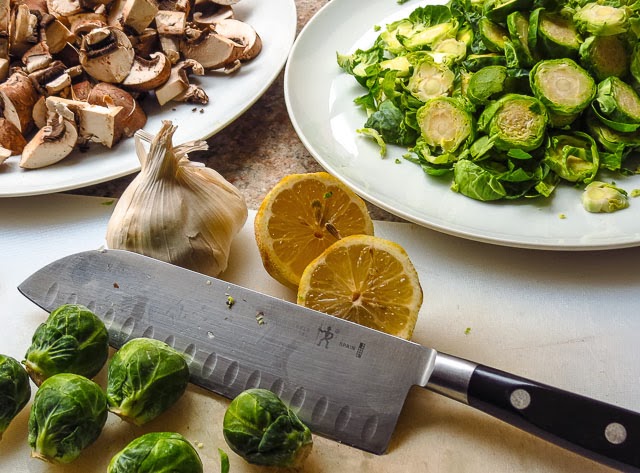 What defines a great hash? Several years ago I posted (link) my view that any really good hash would:
Hash typically begins with potatoes, but not today. Oh no, the rules changed for a hash based on mushrooms instead of potatoes. There would be no crispy, browned potatoes here, but who could resist caramelized 'shrooms and onions with bacon?! Add some Brussels sprouts because... well, just because they're a favorite Fall vegetable, they are bursting with healthy attributes, and I have some left after Saturday's Potato and Brussels Sprouts hash (link).

I was not kidding earlier this week (link) when I said I really, really craved a skillet of hash, and that the next batch would have bacon. This second skillet of hash was inspired by JoytheBaker's post with it's meltingly delicious mushroom base. I didn't change much, just added some fresh thyme plus the all-important bacon and its rendered fat, used small white onions instead of shallots and finally, omitted her recommended cooked egg topping. Swap the 'shrooms out for potatoes and you have the base ingredients for my Oven-Roasted Sprouts! No wonder I was so ready to try this mushroom version of hash.

The hash was not a fast-prep dish. It takes a while for the mushrooms to release their liquid, cook down and brown nicely, but you don't want to rush through this step. Steamed 'shrooms are not as tasty or pretty as their slow-cooked, caramelized kin. Most of my time was spent working with the onions and Brussels sprouts, not a difficult chore but I was slowed down by trying to use my left hand for chopping/slicing those little round globes. (No blood was spilled during this event.)

The result? we enjoyed this vegetable combination at lunch, thinking it more of a side dish than breakfast fare. Perhaps serving an egg on top would have made the difference there. The rich, mellow taste of the bacon-flavored mushrooms shone in this recipe, and that alone was enough to win me over. The sprouts came along for the ride, a pleasant sidekick to the spotlight-grabbing 'shrooms. Crisp bacon crumbles provided a fine topping to each serving, but a tiny internal voice queried, "Where's the crunch of crispy potato that makes this hash?" 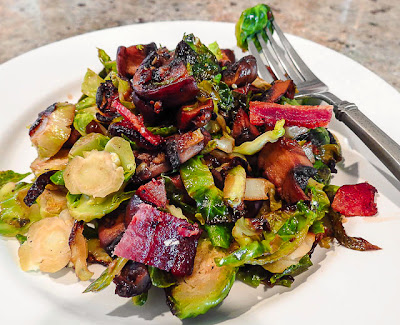 Prep the vegetables:
To Prepare:
Notes: