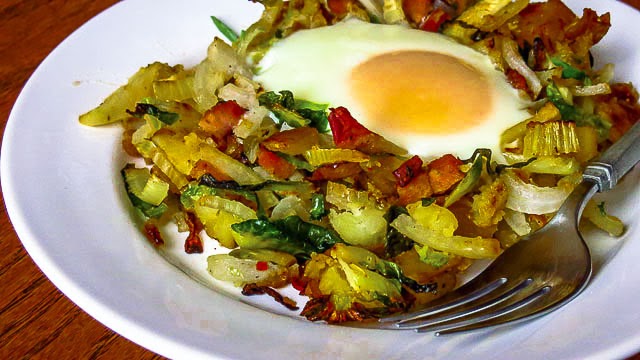 I am easily influenced by the many tempting recipes and photos I find online. This week is a perfect example, and the reason I am making hash for breakfast... again. I should stay out of the kitchen for a couple of weeks, the 30 stitches in my right arm need time to heal, but left-handed chopping works if I'm very slow and careful.

This post for potato and Brussels sprouts hash (by J. Kenji Lopez-Alt at Serious Eats) launched my renewed interest in hash, and then Joy the Baker's mushroom and sprouts recipe and photos finished me off completely. I really, really craved a skillet of crispy, savory hash. All that left was the question of potatoes or mushrooms. I already knew there should be bacon involved. "Mushroom and Maybe Potato Hash with Bacon, Kale, Brussels Sprouts, Onions and of course, Bacon and Topped With Eggs", might be a bit too long for a catchy blog post title, but it sounded heavenly to me.

Reality set in. There were w-a-y too many ingredients to incorporate into just one skillet of hash, and my favorite cast iron skillet is only 8 inches wide. Those delicious individual flavors would be lost in the scrum. An obvious solution was to cook different combinations and play with the ingredients over several days.
chicken andouille sausage. Then salt and pepper, fresh basil and parsley, lemon zest and smoked salt joined the mix. What? no bacon? No, I thought the smoked salt might handle that flavor component. I topped my serving with an oven-baked egg and, as usual, RL went with hash, no egg, and an overly generous dollop of salsa on top.

The result: The hash was pleasant enough, and we cheerfully ate every bit of it. Though filling and fine for a family breakfast, it was not special enough for a company meal. It was just... hash. I love fennel, but could not locate it as a separate, licoricey taste. Even the sprouts were quite mildly well behaved. Smoked salt was a major flavor hit as a finish, but that's no surprise. I'm tempted to drop the smoked salt and the andouille next time, and substitute smoked bacon instead for the delicious salty/smokey/fat combination that I missed. Or maybe I'll just move on to a mushroom and sprouts hash, ignoring the potatoes a la Joy the Baker. Next time I guarantee, there will be bacon. 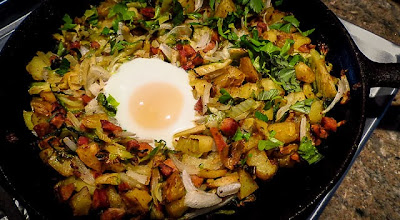 Preheat the oven to 425 f. Slice and dice the vegetables, sausage, and herbs. Zest and juice the lemon. Combine the parsley, basil and lemon zest; place in a small bowl and set aside. Now you're ready to cook.

Put the diced potatoes into a small pan, cover with generously salted water and bring to a boil. Reduce the heat to a rolling simmer and cook until barely tender (about 3 minutes). Drain and set aside.

Add 2 tablespoons of the oil to a cast iron skillet and heat over medium-high heat until the oil shimmers, but don't let it smoke. Add the drained potatoes and spread into a single layer. Add salt and pepper to your liking and let the potatoes cook undisturbed for several minutes until their bottoms begin to brown. Turn and cook until browned on most surfaces (this will take roughly 5 minutes). Be gentle when you turn the taters, you don't want to mash them.

Add the remaining 1 tablespoon of oil, the sausage (if you're using it), shredded sprouts and fennel to the skillet and cook for 2 or 3 minutes to warm and soften the leaves. (If you did not use spicy sausage, this is the time to add a dash or two of your favorite hot sauce.) Add the onion and cook, turning over occasionally until the vegetables just begin to get crispy.

Remove  from the heat, stir in half of the lemon zest, parsley and basil mix. Use a large tablespoon or ladle to press 2 depressions in the hash and gently break an egg into each spot. Place the skillet in the preheated 425 f oven  and bake until the eggs are done to your preference (whites are set sufficiently after 4 minutes in my oven).

Remove from the oven and sprinkle with lemon juice and the remaining lemon zest, parsley and basil mix. Serve and top each serving with a sprinkle of smoked salt. Have bowls of hot sauce, salsa and/or sour cream available.