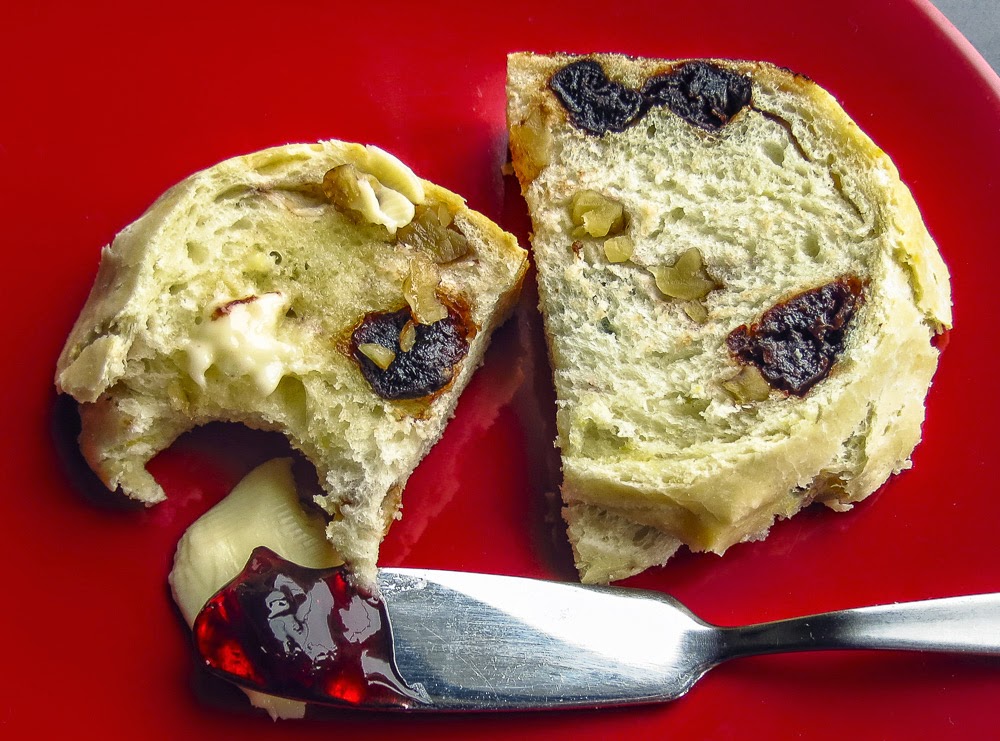 I could have spent hours watching a squadron of seagulls as they played in the wind, working the currents high aloft, seeming to hang suspended without ever flapping a wing, then suddenly climb or dive to travel at warp speed out of sight, only to reappear in view out another window.

Instead of mentally soaring with seagulls I turned my attention indoors and flew in the galley, hoping to produce a fast yeast bread with some added sourdough tang. Fast and sourdough don't often mix. Fast-rise breads often sacrifice flavor and taste boringly bland. A true sourdough loaf requires long hours, even days, to achieve its rise and full flavor. Hoping for the best of both worlds I tweaked a Cookistry recipe and began mixing dough.

The boat galley lacks a stand mixer but that's no problem; kneading is a therapeutic activity and I enjoy the process. Lacking a kitchen scale as well, I used quantity measures rather than weight for the sourdough starter and flour. I'll work out the weights when I'm back ashore, or figure out some out-of-the-way spot to store one more galley appliance. For now I'm working by feel to get the right ratio of liquid and flour.

RL requested I incorporate his favorite bread additions into the mix - sour cherries and nuts. These add-ins have been problematic in previous sourdough loaves (link), tearing the surface and poking out of the bread only to scorch and burn in the oven. Fix #1: Rather than mix these ingredients into the dough, try the typical cinnamon roll technique: roll out the dough into a rectangle, scatter the fruit and nuts over the surface, then roll up and coil into a round (rather than cut into individual pieces). Fix #2: lower the oven temperature from 375 F to 350 F.

Success! the recipe produced two small rounds with a solid hint of sourdough flavor and featured a crisp crust with a tender crumb. We eagerly devoured several thick slices, still warm from the oven, without butter or jam. Yum! Next we snacked on small chunks, slathered with salted butter and cherry jam (RL) or lingonberry jam (me). Again, Yum! Toasted for breakfast the next day the bread was still tasty. And by day three it was gone.

In Review:
Yes, I would make this recipe again, whenever short on time or patience. It won't match the flavor and texture of a traditional two-day sourdough, but it was a decided improvement on some other fast-rise loaves I have tried.

I awarded positive points for...
... the crisp crust, even though it never achieved beautiful golden brown status.
... the soft crumb and pleasant homemade, white-bread texture.
... the fast rise and ease of preparation.
... a flavor that had some presence.
RL deducted points for...
... the lack of large, airy holes and the homemade, white-bread texture.
... increasing dry interior on days two and three.
... uneven distribution of cherries and nuts (the fault of the cook, not the recipe).

It could be time to bake bread again... unless I'm distracted by the seagulls. 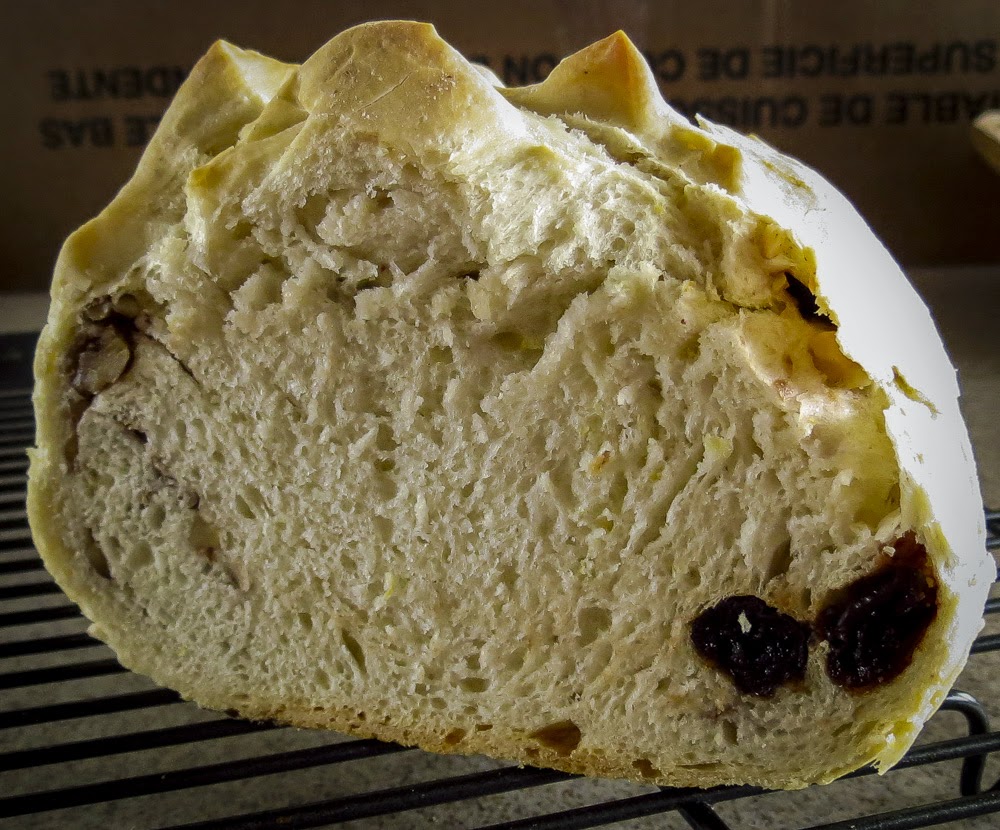 Fast-Rise Bread with Added Sourdough, Sour Cherries and Walnuts
adapted from Donna's recipe at Cookistry
3/4 cup warm water
generous pinch of sugar2 1/4 teaspoons (1 package) rapid rise yeast 1 cup sourdough starter (at 100 percent hydration)2 1/2 to 3 cups AP flour
grated zest of 1 lemon1 teaspoon salt1 tablespoon olive oil 1 cup dried sour cherries
1/2 cup chopped walnuts
In a large bowl whisk together the yeast, sugar and water, then add the starter and flour. Knead the dough, adding flour as necessary to achieve a silky and elastic texture. Add the lemon zest, salt and olive oil; continue kneading until both are fully incorporated.Oil the mixing bowl lightly, shape the dough into a ball and return it to the bowl. Cover the bowl with plastic wrap and set aside until the dough has doubled, (typically one hour in my galley.Preheat the oven to 350 degrees and sprinkle some cornmeal on a baking sheet. Remove the dough from the bowl, and shape as desired.
(I divided the dough in half, rolled each piece into a large rectangle, and sprinkled evenly with cherries and nuts. Beginning with a long side, roll up into a cylinder and coil into a round ball; pat firmly or roll to smooth and tighten the surface.)
Place on parchment, cover with plastic wrap sprayed with cooking spray, and let it rise until doubled, about 30 to 40 minutes.Remove the plastic wrap, slash the dough as desired, and bake at 350 degrees until browned and internal temperature reads 185-195, about 40 minutes.
(I baked one loaf inside a preheated, covered Dutch oven and the second loaf uncovered, resting on a parchment paper-lined baking sheet. The results were remarkably similar.)
Cool completely on a rack before cutting.