Foodie thoughts flit through my brain 24/7, not taking up much space but continually popping up like the bubbles in a boiling pot. Lately I have nudged these thoughts into a corner, ignoring the urge to cook while we organized boat projects and stowed boat "stuff".

I was welcomed back aboard the boat this week by a marina neighbor D who wondered how soon to expect some baked goods. Hmmm, nice to be missed, but now the pressure is on to deliver something, and soon. It's fun to share baked treats, to get feedback about new recipes, and sharing keeps us from developing rapidly expanding waistlines. One quick batch of Cranberry & Orange Shortbread Squares flew out of the galley, delivered to the marina office crew, but D is still waiting for his plate of cookies, cinnamon buns or baked something.

Should my next baked something be sweet or savory? Decisions, decisions... I wavered, settling on bread with a mix of sweet and savory add-ins. My breads usually feature sourdough and/or unbleached white flour, but two small bags of rye flour begged to join the party. The Capt. loves sour cherries and lemon zest added to sourdough leaves (link), so those items plus a handful of pecans went into the mix.

The King Arthur Flour website holds an intriguing recipe for No-Knead Chocolate-Cherry-Pecan Bread, unusual both in ingredients and method. I gambled on the method, after all KA is known for great baking, but could not embrace the idea of chocolate in rye bread. No courage... what can I say? The unusual (to me) method involved adding yeast twice, once for each rise. I was skeptical; while it seemed to work just fine, I don't know whether it was essential or not. Plenty of gluten strands had developed by the end of the first rise. 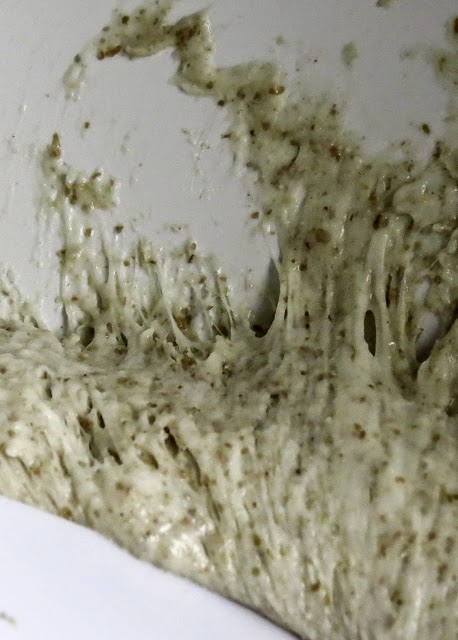 Dividing the dough in half provided 2 small loaves, perfectly sized for my red bread pot. The shaped loaves rested in parchment paper-covered skillets for the second rise. 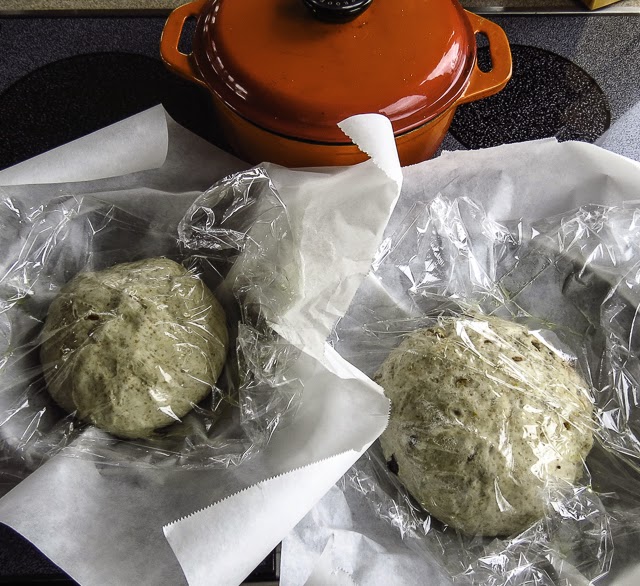 A few cherries had migrated outside the dough ball and scorched on the bottom of the loaf. Was the oven too hot? Was the rack set too low? These are new issues to investigate. 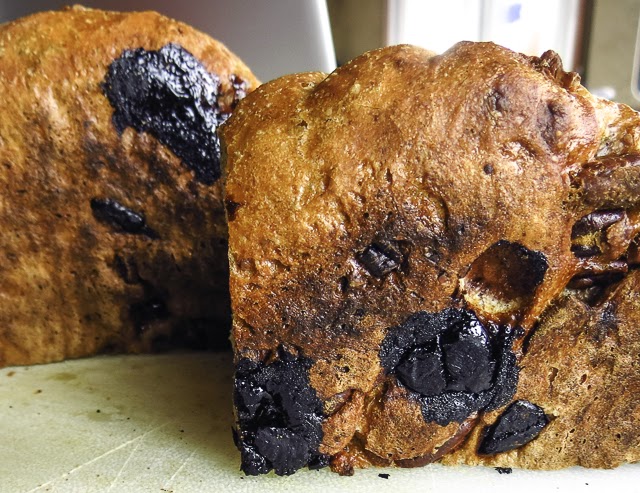 No problem, we easily polished off half a loaf during a taste-test, trimming off the few offending burnt cherries on th bottom. We nibbled on one slice plain, another slice buttered, the next slice buttered and sprinkled with sea salt (my favorite), and finally buttered and spread with jam. YUM to all 4 bites! 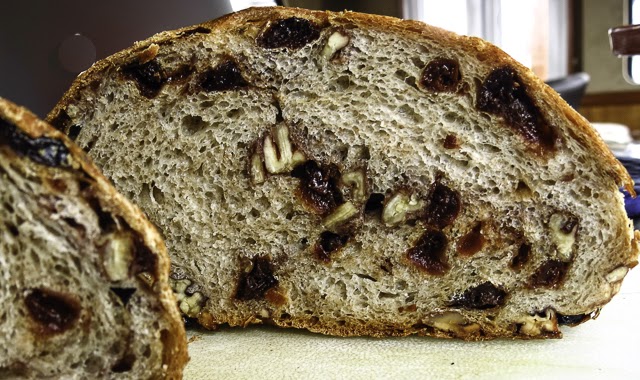 The result: really tasty bread, plain or toasted, with just a hint of lemon and rye. Of course RL, aka Mr. Sweet Tooth, preferred his slathered with butter and cherry preserves. You really can't pass up a double cherry flavor. 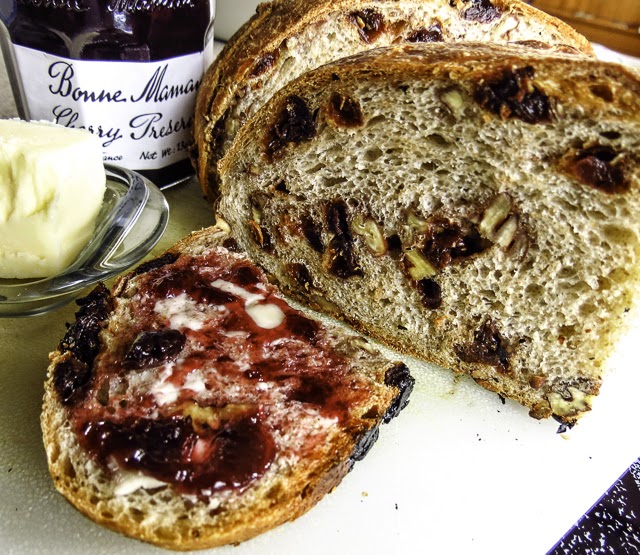 Changes? next time I'll add a smidge of sugar to the dough and incorporate the cherries, zest and nuts at the beginning. I will also raise the oven rack one level higher and try baking at 425 instead of 450. 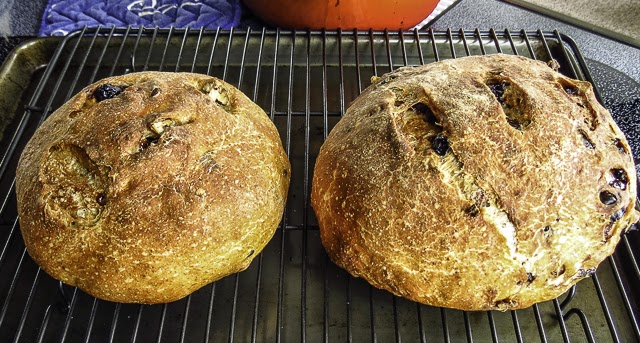 Stir everything together to make a soft, shaggy dough. Cover the bowl with plastic wrap. Let the dough rest overnight at room temperature, 12 to 16 hours recommended. The dough will expand... slowly.


"Tempting as it may be, DO NOT slice the bread until it's completely cool! Doing so will make the slides side of the loaf gummy."

The warning above came straight from King Arthur - and who am I to argue with the king?! So we waited, and waited some more, impatiently waited for the bread to cool.

Yield: 1 large boule
I divided the dough in half to accommodate my small Dutch oven and reduced the uncovered baking time by 10 minutes.